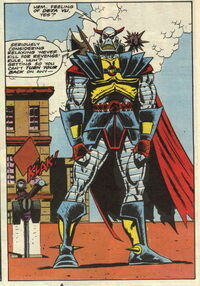 Hrn. Death's Head is a "Freelance Peacekeeping Agent". Some call him a "bounty hunter," but never twice, yes? Handsome, resourceful, deadly—all words he uses to describe himself. Modest too, eh? In the past he's been accused of ending statements as questions.[1] He never could understand why, right?

Death's Head learned a long time ago that if a mechanoid is to survive in this life, he's got to respect the economy. Money is everything. Still, it's also nice to enjoy one's job, yes? He uses a wide range of weapons, most of which (unlike his plasma rifle) he can use in place of his right hand. Missiles, titanium shott blaster — but sometimes it's just more satisfying to use a good old-fashioned axe, hrn?

Death's Head came to Earth looking for a bounty - he was hired by Hot Rod to kill Megatron. Trying to infiltrate Decepticon City, he glued wings to his back and pretended to be a Seeker. Unfortunately, out of inpatience he didn't wait for the glue or paint to dry before confronting the Decepticon guards, and although he didn't fool them with his disguise, he did stun them with his audacity.

Eventually Optimus Prime paid off his bounty so Death's Head would leave Earth. The whole situation did not leave Death's Head with a good impression of the Autobots.

Death's Head is a TP-Only character. He's been temped by BZero.