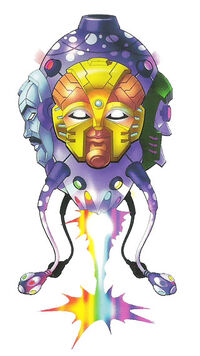 DEALITICUS is the quintessential tradesman. He is adept at selling nearly anything to anyone, and his specialty is weapons. He reinvests the capital he earns into developing newer, more powerful weapons, and then grows rich selling upgrades. He's more of a talker than a fighter, but anyone trying to take advantage of him will find out he knows how to use weapons as well as build them. He is often found carrying heavy ordinance -- not for defense, but to sell to the many warlike races populating the galaxy. He is adept at escalating wars, just so he can profit. To help him with his dealings, Dealiticus has feigning emotions and sincerity down to an art form. He leads a pack of specialized, high-tech Sharkticons, and a small crew of assorted crewmen and pirates.

Since Transformers the Movie never took place in our canon, Wheelie got to Earth by stowing away aboard a Quintesson transport shuttle, piloted by Dealiticus.

Dealiticus has been spying on Earth in preparation of a Quintesson Invasion, doing experiments on captured Autobots and Earth's superhumans and even setting up a space station in Earth's orbit.

Dealiticus actually started out as a character on Transformers 2k5 MUSH, eventually becoming a high-ranking member of the now-defunct Vilnacron faction on that MUSH. Dealiticus is a Judge variant of Quintesson.

In Deep Space Nine terms, on 2k5 Deal was Quark. On TFU he is more Garak =) "a plain and simple tailor" er, weapons dealer...

BZero should have named him Aequitas. Aequitas is a Latin word referring to the concept of fairness between individuals, as well as the name of the Roman goddess of fair trade and honest merchants. #ironicnames