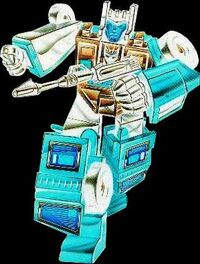 "Our actions give us meaning."

Cheerful and philosophical, DEAD END is passionate about the war and his place in it. A student when the war started, he quickly signed up with the Decepticons and was assigned to the Stunticons soon after their creation. He has a fervent belief that every action has meaning, and that what one does with their life is ultimately more important than the results of their efforts. He is happy to die in battle if he goes out knowing he fights for a good cause.

In Porsche 928 mode, Dead End can reach speeds of up to 220 mph. He can emit a radar signal that allows him to detect the movements of any vehicle or robot within a 200 mile radius as well as to mentally map the surrounding terrain; he's adept at using this to lead his enemies into traps, such as dead ends. In robot mode he carries a compressor air gun which can let out a blast of air that packs a 40,000 psi punch, enough to splinter a grove of oak trees.

A student when the war started, he quickly signed up with the Decepticons and was assigned to the Stunticons soon after their creation.

Dead End guards Polyhex and Darkmount, giving a cheerful smile to all who pass.

Dead End was given an Earth mode in case he wound up assigned to the Nemesis mission, but ultimately stayed on Cybertron.