View source
The name or term Dead End refers to more than one character or idea. For a list of other meanings, see Dead End (disambiguation). 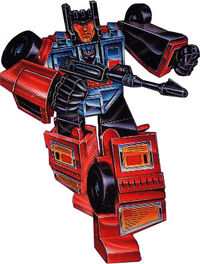 Sullen and fatalistic, DEAD END sees little reason to continue the Autobot-Decepticon war, since all Transformers eventually become inoperative anyway. He spends more time keeping himself unmarred and shiny than any of his fellow Stunticons, who tend to speculate that he wants to at least make sure he leaves a pretty wreck when he dies. This vanity leads to a lot of teasing that only makes Dead End feel worse, until just about the only thing that can lift his spirits is blasting Autobots in battle. It's also the only time he's too busy trying to save his own life to get depressed about the possibility of losing it. In Porsche 928 mode, Dead End can reach speeds of up to 220 mph. He can emit a radar signal that allows him to detect the movements of any vehicle or robot within a 200 mile radius as well as to mentally map the surrounding terrain; he's adept at using this to lead his enemies into traps, such as dead ends. In robot mode he carries a compressor air gun which can let out a blast of air that packs a 40,000 psi punch, enough to splinter a grove of oak trees. When he can be convinced to do so, he combines with fellow Stunticons to form Menasor.

Dead End, along with the other Stunticons, was given life by Vector Sigma in an attempt by Megatron to form a ground based unit. Seeing little choice in the matter, Dead End decided to do what Megatron said.

The Decepticons returned to Earth with the newly awakened Stunticons, who began wreaking havoc and damaging the Autobots' good name by attacking the US military base containing experimental rocket fuel. Eventually, the Autobots returned with the newly built Aerialbots whose combined form Superion defeated the Stunticon combiner Menasor.

Despite this defeat, the Stunticons were the key component in Megatron's elaborate scheme to hold a fake charity race from Paris to Istanbul so he could steal US driver Auggie Cahnay's car which would be melted down to house the powerful Pearl of Bahoudin. Megatron ordered the Stunticons to eliminate the Autobots protecting Cahnay. While his fellow Stunticons surrounded the brothers Sunstreaker and Sideswipe, Dead End leaped ahead of the racers and transformed, blasting the boxed-in Autobots off the road. They disabled several more racers, but when Dead End set a trap for Bluestreak, the wily gunner managed to escape his attackers. Together, Auggie Cahnay, Bumblebee, Tracks and Bluestreak defeated Menasor and destroyed the Pearl of Bahoudin.

When Megatron was infected with Cosmic Rust after a trip to the lost Autobot colony of Antilla, the Stunticons were assigned to capture the Autobot scientist Perceptor, who had developed the powerful anti-corrosion Corrostop. After Megatron cured himself and infected the Autobots with the Cosmic Rust, Menasor attacked the Statue of Liberty in New York City with the ancient Lightning Bug heat ray, intent on stopping the Autobots from matter-duplicating more Corrostop from the layer they sprayed on the statue. Superion defeated Menasor and destroyed the Lightning Bug.

Caught up in a demolition derby, the Stunticons missed most of the "civil war" between the Decepticons and Starscream's Combaticons. They arrived at the battle site just as Starscream was declaring victory over Megatron. Dead End didn't particularly care either way, until Motormaster pointed out that Starscream was insufferable enough already without being in charge, and Dead End quickly conceded that point. The Stunticons formed Menasor and, one Batman *POW* later, Bruticus was in pieces.

On another occasion, Megatron instructed the Stunticons to bring him a series of scientific components for his latest Unbeatable Super Weapon. Dead End and Drag Strip were assigned to acquire an experimental generator from the U.S. military. The retrieval was successful, but they encountered the Autobots Tracks and Warpath on the drive to their rendezvous with Megatron. Dead End was disabled by a blast of Tracks' black beam gun, followed by Warpath putting his fist through the Stunticon's roof. Disabled and collected as prisoners of war, the Stunticons were brought back to the Ark and held in captivity while Optimus Prime and a strike team of Autobots used camouflage paint to mimic the Stunticons and infiltrate Megatron's camp. Special operations agent Jazz, a cheerful and easy-going robot, assumed Dead End's appearance, which undoubtedly made Dead End feel even worse. The real Stunticons managed to break free, however, and confronted their doppelgangers as Menasor. Ultimately, the Super Weapon was destroyed, and the Decepticons were forced into a retreat.

Dead End was last seen in Th' Bar on Cybertron.