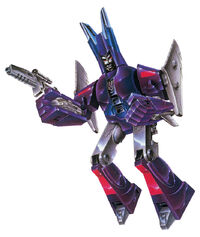 CYCLONUS is a huge and emotionless air-warrior, forged by the power of Unicron. He is capable of deriving vast resources of power and energy, as well as strength, in direct proportion to his need. In robot mode he carries an oxidizing laser capable of fusing an enemy robot's internal mechanisms. A dedicated destroyer, CYCLONUS transforms into a gigantic nuclear-powered twin turbine space fighter for interstellar pursuit and warfare. His firepower remains intact in this mode, and is augmented by an incendiary bomb rack. He has a complex personality, but his major interests are focused on conquest. With the destruction of his creator, his future is in his hands. For now he taken the remains of his forces and settled on Chaar, planning his revenge. A powerful warrior and ruler, CYCLONUS has no known weaknesses.