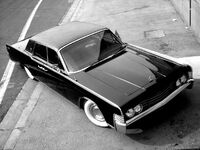 CUFFS is one of Director Alert’s Secret Police, and he’s very good at his work. Loyal, diligent and dutiful, CUFFS obeys orders to the letter and doesn't let his feelings get in the way of his duty, whether it’s melting down a prisoner in the smelting pool or just rolling down one of Cybertron’s highways on patrol. Armed with a high-powered, long-ranged taser and laser-pistol he can temporarily down even a large Transformer after chasing down traitors in his stylish, high-finned customized 1966 Lincoln altmode, recently retrofitted for the impending invasion of Earth. In his off time he focuses on take-down and restraint techniques to the point that it’s become a fixation. Whether he’s tying up and interrogating a subject, or he’s the one in energy cuffs, CUFFS has become a bondage enthusiast. So far he has not let his obsession negatively effect his work (if anything, it can be an asset), but Director Alert has his optics on CUFFS, and should it become a problem, it may be CUFFS’s turn to face the smelting pit. Nervous of any leadership position, Cuffs has already turned down two promotions to stay in his little niche, and being put on the spot can greatly inhibit him.

Cuffs is one of Director Alert's security grunts, and reports directly to Nightbeat.

Cuffs was recently rebuilt as a customized 1966 Lincoln for the impending invasion of Earth.

April 2011: While SG-Perceptor was broadcasting the execution of Slugfest on ABN, Temperance staged a daring rescue from orbit. Cosmos gave chase, but Temperance evaded him. Before Cosmos could continue pursuit, the SG-Junkions activated their gravity drive and folded space directly into the Plait Expanse. Practically the entire Junkion fleet passed into the Cybertron system. Temperance saved Slugfest as the Junkions poured onto the surface of Cybertron, led by SG-Magnus. While wholesale pandemonium spread across Cybertron, Magnus chased Perceptor and Cuffs back to Iacon. Perceptor went to activate the Stellar Spanner (the SG version of the Space Bridge) so he could flee to Earth, while Cuffs got stuck outside. Magnus grabbed Cuffs, brought him up to the Spellar Spanner, killed Perceptor and threw Cuffs in instead. Cuffs (along with Perceptor's head) was then sent through to Earth to deliver a message to Emperor Prime: Magnus is coming for him.

Cuffs was partially repaired by Jetfire, but before he could fully recover, he was taken by Jazz to the north pole and dumped near the northern rift, to keep him out of the way during the pending Jazz/Jetfire death duel.

Cuffs was found by first Motormaster and then an Alternate Valour from the mainstream universe. Cuffs gave each of them a warning about the upcoming invasion by Ultra Magnus, but otherwise refused to be helped or repaired.

Cuffs was eventually found by Jetfire, who fixed him up and returned him to the Ark. Cuffs later sought out Prowl's advice about what to do about the attack on the Autobots' homeworld by Magnus and the Junkions.

"Cuffs reporting in here. From earth. I'll explain below. Basically in the middle of an execution two things happened recently on Cybertron. Firstly, a Decepticon managed to breach through and rescue Slugfest. But before we could find out who slacked off, the...

He's coming for you, Prime. And they aren't gonna stop. We gotta get ready NOW.

Cuffs was created and is played by horsetuna.

Retrieved from "https://tfumux.fandom.com/wiki/Cuffs_(SG)?oldid=70996"
Community content is available under CC-BY-SA unless otherwise noted.