This page is for the Apocalypse World Autobot former-ambassador and spy. For his evil Shattered Glass counterpart, see Crosscut (SG). 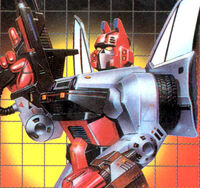 CROSSCUT is a former diplomat, and is still sought after by the remains of Cybertron’s underworld for negotiating deals between hostile parties.  As far as representing for Optimus Prime and the Autobots, however, Crosscut is done.  He blames Prime (and himself) for holding out too long for dreams of peace and reconciliation while Cybertron burned.  Now all that is left in Crosscut’s fuel-pump is revenge and a rather large death wish.  Crosscut only hopes to bring as many of his enemies with him as possible on his final way down.

Crosscut is small for a Cybertronian – barely larger than a Minibot.  The murderous look in his optics, however, may be enough to give larger robots pause.  His face is protected by a gunmetal-grey mask, but his feelings of disgust and hatred are more than evident nonetheless.  His armor is dented and so rusted you can barely tell it was once silver.  The weapons built into his wrists, however, seem well-maintained, and what would have been state-of-the-art before the Collapse.  A larger gun and a chrome sword hang close-at-hand on his back.  His blood-red gauntlets clench with barely suppressed rage.  His entire body is coiled like a spring, ready to launch himself into furious combat at the slightest provocation.

CROSSCUT and his partner/bodyguard Road Rage came to Earth in 1986 to work with the American government to establishing Autobot City there.

After Spike organized a stronger cooperation between the Autobots and G.I. Joe, Crosscut recruited Marissa Faireborn to assist with this new Earth Defense Command.

In 2010, Crosscut worked with the Dunham administration to secure a new location for Autobot City in the Lookout Mountain area. However, the opening of an interdimentional rift in the city's science lab delayed the move.

In 2011, with the world flooded, Crosscut worked closely with Spike to form a shaky alliance with both Cobra and G.I. Joe against the Decepticons.

In 2012, following the flood, Crosscut was present during an attack on a Canadian oil pipeline, where he successfully kept Scourge busy while Elita One rescued oil workers. Crosscut later was tracked to Mexico by Scourge, where he was briefly captured before Scourge was driven off by Blaster piloting the Autobot Shuttle Outrider. He has since recovered, and is currently chosen to remain in Autobot City while helping coordinate worldwide relief efforts.

In June of 2012, Crosscut and Spike traveled to Trucial Abysmia for the sixteenth birthday of Sheikh Mohammed. Although Sheikh Mohammed was bitterly disappointed that Optimus Prime himself could not attend, Spike managed to negotiate, with slight help from Crosscut, a 10 percent increase in oil donation to world recovery efforts, 2 percent of which was to be delivered immediately.

In 2013, Crosscut has been active in the ongoing relations between the Autobots and the new ruler of Trucial Abysmia, Sheikh Mohammed.

In 2015, Crosscut, Road Rage, and Spike traveled to Helex to negotiate with the ruling Triumverate.

In 2016, Spike conferred with Crosscut about whether or not to give Arkeville over to G.I. Joe for detention. However, since Dr. Arkeville had not violated any clause of his agreement with the Autobots to help take back Autobot City, any move to surrender Dr. Arkeville to the Joes would make it appear that the Autobots went back on their word. Spike thought that would do irreparable harm to the Autobots in the eyes of the world, even for someone like Dr. Arkeville. Crosscut supported Spike's decision. Having concluded that (and much to Arkeville's luck), the Autobots decided to keep him. Shortly thereafter, however, Arkeville attacked Spike physically, clearly violating the terms of his agreement and making the argument moot.

In May of 2016 Crosscut and Spike travelled to Praxus and helped negotiate a deal in which the Decepticons would withdraw their forces from Praxus in exchange for continued neutrality in the way between the Autobots and the Decepticons.

Crosscut continued to serve the Autobots on the ambassador end, spending more time on Cybertron as Spike became more comfortable, confident (and competent) in his role as ambassador and liaison. With one more ambassador to shoulder some of the duties, Crosscut worked on establishing contact and allies on other planets to help the Autobot cause.

After Spike's death in 2046, Crosscut became more and more reserved from his diplomatic duties, and eventually resigned his position as Autobot ambassador.

Crosscut is available for application. In the meantime, he's being temped by Bzero.