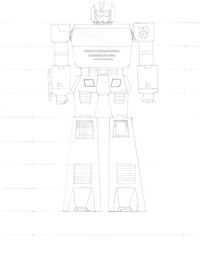 Crosscheck is a brilliant scientist but through the years, he experimented and upgraded himself into a capable warrior. However, he feels more at home in a laboratory than on the battlefield and he is on an eternal search for knowledge. In robot mode, he’s equipped with a hypersonic rifle, a shoulder mounted missile launcher and an energy sword. He can transform into a semi truck with reinforced plating and equipped with laser cannons.

A long time ago, at the start of the war, Crosscheck foresaw a future in which Cybertron would be ravaged, depleted of resources with the Cybertronian race on the brink of extinction.  He tried to warn the warring factions and was downright ignored by the Decepticons.  Optimus was sensible to his warning but did not have the power to act upon it.  Crosscheck calculated the Autobots were the best chance Cybertron had and so he joined them.

The situation, however, continued to spiral toward a catastrophe for Cybertron and a few years before the Ark launched, Crosscheck left the planet aboard a spaceship he secretly built.  His objective was to settle on an energy rich planet that could fuel his experimentation as he was looking for a renewable source of energy to feed Cybertron.  He found such a planet, a techno world called Symetra which, unknown to him, was threatened by an AI gone rogue that was taking control of the mechanical life-forms of the planet. His ship was destroyed soon after it landed, and Crosscheck barely managed to escape with the help of a resistance group.

Now stranded on Symetra, he could do nothing but help the resistance to ensure his own survival.  Through the years, he managed to salvage resources and tech from their raid and upgraded himself from a rather weak scientist to a capable warrior, reinforcing his armor and acquiring new weapons.  Crosscheck was still worried about Cybertron’s fate and was looking for a way to get back home.  That opportunity came when a resistance spy managed to bring data about the planet main spaceport and a quick stealth shuttle developed by the AI to expand his rule to other planets.  Crosscheck convinced the resistance that launching an assault on the spaceport and seizing the shuttle would be a major blow to the AI forces.  Their plans crumbled during the assault as the spaceport was more heavily guarded than they expected. Nonetheless, Crosscheck managed to make his way to the shuttle and flee with it, eventually making his way back to Cyberton.

Stay tuned to discover it.

"Reporting. Designation: Crosscheck. Returning from mission Alpha-46-Epsilon-34. Mission was a failure and I got stranded for while. Requesting permission to land at Iacon. Crosscheck out."

"As per Jazz's request, I studied the furry creature currently residing in the medical center. They do not classify as any species inventoried in the databases, I have access to and do not origin from Cybertron." His image is replaced by a technical report while his voice continues to be heard, "Testing suggests they can absorb and attract to them, particles which is how they build their frame. Xenobiology isn't my strong suit but assuming a reasonable reproduction rate, they do not seem to pose a threat to Cybertron's ecosystem."


This is a simple text request: "Requesting all Autobots encountering an energon source to report its location and any relevant data about its surrounding. Crosscheck."

Crosscheck has been created and played by Bhaal