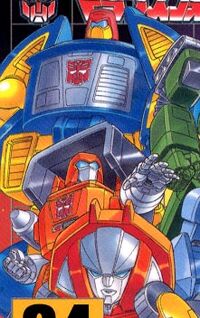 "The loneliness of space gets to you after a while..."

Fast and intelligent, bored and lonely, COSMOS has reason to regret his abilities, which often separate him from the few Autobot friends he has. Alas, his skills are far too extraordinary to ignore.

Few of his faction can achieve escape velocity and enter planetary orbit unaided, as he can, from planets as massive as Earth or slightly larger. He carries fuel reserves sufficient for short orbital journeys; he is quite able to land on Earth's Moon, then take off and return to Earth. For longer missions, Cosmos is equipped with one of the Autobots' few FTL drives. Cosmos enjoys such diversions immensely. Generally, however, he remains in orbit, relaying messages, observing enemy installations, and watching for Decepticon activity in nearby space. His optical sensors are able to observe a human radio host standing outside in the high desert from 600 miles up.

As a living Transformer, his advantage over a simple satellite is great, but it is a boring life for Cosmos. Every so often he breaks the monotony by hovering eerily above the backyards of Earth citizens, drifting silently behind the cars of lone drivers with his running lights on, or briefly jamming TV transmissions with reruns of The Outer Limits. He has also been known to zigzag through meteor showers on a clear night, showing off his space piloting skills. Naturally, this causes some consternation to the poor humans, but it's all in good fun to Cosmos. Unicron save us from bored techies.

Cosmos has been spying on Earth for the Autobots for several years.

Cosmos delivered Goldbug and Snoop to Earth for on-the-ground reconnaissance.

In April of 2011, while SG-Perceptor was broadcasting the execution of Slugfest on ABN, Temperance staged a daring rescue from orbit. Cosmos gave chase, but Temperance evaded him. Before Cosmos could continue pursuit, the SG-Junkions activated their gravity drive and folded space directly into the Plait Expanse. Practically the entire Junkion fleet passed into the Cybertron system. Temperance saved Slugfest as the Junkions poured onto the surface of Cybertron, led by SG-Magnus.

For the TP, Cosmos has been temped so far by BZero, but is available if anyone else wants to play him.