View source
This article is about the heroic Autobot communicator - for his evil Shattered Glass counterpart, see Cosmos (SG). 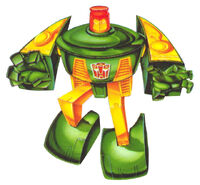 Fast and intelligent, bored and lonely, Cosmos has reason to regret his abilities, which often separate him from his Autobot friends. Alas, his skills are far too extraordinary to ignore.

Few of his faction can achieve escape velocity and enter planetary orbit unaided, as he can, from planets as big as Earth or slightly larger. He carries fuel reserves sufficient for short orbital journeys; he is quite able to land on Earth's Moon, then take off and return to Earth. Cosmos enjoys such diversions immensely. Generally, however, he remains in orbit, relaying messages, observing enemy installations, and watching for Decepticon activity in nearby space. His optical sensors are able to observe a human radio host standing outside in the high desert from 600 miles up.

As a living Transformer, his advantage over a simple satellite is great, but it is a boring life for Cosmos. Every so often he breaks the monotony by hovering eerily above the backyards of Earth citizens, drifting silently behind the cars of lone drivers with his running lights on, or briefly jamming TV transmissions with reruns of The Outer Limits. He has also been known to zigzag through meteor showers on a clear night, showing off his space piloting skills. Naturally, this causes some consternation to the poor humans he is supposed to defend, but it's all in good fun. Primus save us from bored techies.

"This is terrible!"
"Cosmos has been in worse predicaments..."
-- Jazz and Perceptor on one of our hero's many misadventures, "The God Gambit"

Space. The final frontier. These are the voyages of Cosmos, Autobot deep-space reconnaissance officer. His continuing mission—to observe Decepticon activities. To provide intelligence to the Autobots in their never ending war. To boldly crash where no other Autobot has crashed before.

Cosmos arrived on Earth during the initial impact of the Ark into the planet. He had been present when the Ark crashed onto prehistoric Earth during the encounter wih the Nemesis, but due to being in the more heavily-damaged Ark belowdecks, he was not recovered and repaired for almost a year.

Our hero began his adventures with a bang, appearing out of nowhere to blindly lead the Autobot spacecraft straight into the sun. If not for the impetuous Cliffjumper trying to change their course and realizing the controls were locked, Cosmos would have had the greatest crash of all. Still, he did his best to save his fellow Autobots in the end, as his deep space armor allowed Cosmos to come inside the ship and continue poking vainly at the control panel long after the others collapsed from their circuits overheating. Trailbreaker's force field eventually saved the Autobots, and they managed to vacate the crumbling ship inside a massive force sphere, tethered to Cosmos to bring them back to Earth.

Cosmos' knack for crashing almost did them in anyhow, though — the same reprogrammed guidance directives that were controlling their ship were now being beamed by Teletraan I to Cosmos himself, forcing him to lead the force sphere back on a course into the sun. Only the freak chance of the Decepticon Thrust visiting the Ark and blowing up Teletraan I on a whim saved the Autobots, and allowed Cosmos to begin towing them back to Earth. Even though time was of the essence, we can only assume Cosmos didn't crash-land upon re-entry.

When next seen, Cosmos was patrolling the spaceways for Decepticon activity with Blaster (probably as a punishment for actually liking Blaster's taste in music) when they came across a lunar base being run by Megatron and Astrotrain. Against logic and precedent, Cosmos actually managed to make a perfect two point landing on a hillside near the base to eavesdrop. Enraged at Cosmos for defying all expectations and NOT crashing (not to mention the, uh... spying he was doing), Megatron ordered Astrotrain to bring him in as a prisoner. Prisoners of war, Cosmos and Blaster were then welded to the wall and used as a power booster and tuning mechanism for Megatron's trans-scrambler, wiping out all radio contact on Earth. Luckily, Blaster managed to send his own signal along Megatron's scrambling beam, alerting the Autobots to their location. Omega Supreme arrived and drew the Decepticons' attention away from their base. Left alone, Cosmos had to do little more than raise his arm to fire off a particle beam that totally destroyed Megatron's antenna array and saved the day, teaching tyrants everywhere once and for all not to underestimate an Autobot just because he's short, fat, ugly, lonely, nerdy and more than a little (Dare we say it?) spacey...

Possibly Cosmos' shining moment was one for most of which he wasn't even conscious. Cosmos crash-landed rather dramatically on Titan after being shot down by the pursuing Astrotrain, who was after the energy data the Autobot carried. Cosmos' body was discovered by the moon's natives, but Astrotrain quickly followed up, having overheard their superstitious discussion and set himself up as one of their Sky Gods. The cowed, religious people quickly obeyed him, and Astrotrain put Cosmos' body in the main temple for use as an idol. The rebel Talaria overheard Astrotrain musing to himself about Cosmos' short-circuit and managed to use Cosmos' systems to get an SOS to the Autobots on Earth. With barely enough power flowing through his systems to stay active, Cosmos found a better use for it: shooting Starscream. With the Decepticon occupied for the moment, Talaria was able to escape unmolested. Jazz and Perceptor were dispatched to Titan via Omega Supreme, and Cosmos was recovered, the Decepticons sent packing, and the Titans (Titanians? Titanoids? Whatever.) were freed from religious dogma.

Somehow, Cosmos managed to talk Prime into letting him serve on Earth for a while as part of the Autobots' joint Crimebuster program with the NYPD. He observed a traffic jam while hovering over Times Square, and later tried to chase down Starscream on foot with Powerglide, only to end up causing massive structural damage to a human mall. Incidentally, Cosmos was back in space very shortly.

After Shrapnel and Bombshell pumped out hundreds of Insecticlones to swarm over the countryside and gather power, Prime sent Cosmos into space to retrieve a giant can of robotic insecticide. (Really — we can't make this stuff up.) On his way back with Spike and Bumblebee, though, Cosmos was attacked by Morphobots on Floron III. Although he managed to break loose of their grip, the techno-organic plants left behind spores on his hull which quickly developed into fully functioning vines that entangled Cosmos as he tried to re-enter Earth's atmosphere. Spike and Bumblebee escaped in an ejector chamber, but Cosmos did his crash-landing bit and was covered in Morphobots by the time he came to a stop, with the robotic insecticide can still inside him. Bumblebee summoned the other Autobots to try and help, and it was Blaster's obnoxious music that ultimately cleared the way and allowed them to free Cosmos. Hoist promised to give Cosmos "the best overhaul he'd ever had" when they got back to the Ark. Uh-huh... niiiiiice...

When he uncovered a Decepticon operation to mine ore from an asteroid they'd pulled into orbit, Cosmos rushed back to warn Prime and gather a strike force. Optimus stressed caution instead and ordered Cosmos back up into space to acquire some hard evidence on the Decepticon activity. Cosmos did as he was asked and actually managed to grab a sample of ore right out of Astrotrain while the Constructicons were loading him up. He brought this "hard evidence" back to Earth to show Prime. The Autobot leader commended Cosmos on his work, but he wasn't quite done and sent Cosmos back out into orbit yet again, this time to track Astrotrain to the refinery the Decepticons must have been using to process the ore. Prime loves his outer space yo-yo.

When Seaspray intercepted a distress signal, Cosmos carried him, Bumblebee and Perceptor to the planet of the Tlalakans, a humanoid race held captive by the Decepticons. Too late, they realized that it was a Decepticon distress call. Droids blasted Cosmos, who (surprise, surprise) crashed on the planet. He remained damaged for a time, too much so to participate in many of the Autobots' adventures on the planet.

Overflying Lord Chumley's castle, Cosmos reported back to headquarters that he'd found the Autobots who'd gone missing. He was able to transmit footage of the captives being subjected to Chumley's fiendish torture devices and report his coordinates to Teletraan I, but his transmission was cut off by Chumley himself, who invited Optimus to try and save his friends.

Cosmos, once again teamed with Blaster, scoured the universe for more Ingredient X so that Perceptor could concoct more corrostop. One can only imagine how many moons and planets he bravely crash-landed on in his fruitless search.

Cosmos works closely with Blaster to ensure the Autobots have constant communication both on Earth, and with distant Cybertron. He also keeps an optic on Earth from his lonely orbital perch.