This page is for the heroic Autobot combiner. For his dumb and evil counterpart, see Computron (SG). 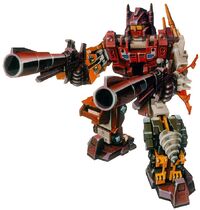 Computron is the combination of the five Autobot Technobots. Typically, the combiner process dulls the wits of the individual transformers, however, such is not the case for Computron. The Technobots managed to remedy that problem, but in the process, severely lagged Computron's reaction time. Before coming to any decision, Computron must analyze the opinions of every individual Technobot, resulting in his falling behind in battle. In the end, he always makes the correct choice, but more often than not it's too little, too late.

Computron is comprised of:

The Technobots functioned as a team long before they became a gestalt. They were given combiner technology in 1987, when they joined back up with the Autobots on Earth. In March of 2015, the Autobots attacked and took over Polyhex, holding it at the expense of a severely-damaged Computron.

While the Technobot team utilizes the same combining technology earlier used by the Aerialbots, Stunticons, Combaticons, and Protectobots, Computron is one of the few combiners with only one consistent combination. This is due to several of the smaller Technobots being different sizes when forming a leg or arm. Lightspeed and Nosecone are consistently the left and/or right legs, and Afterburner and Strafe are consistently the right and left arms. As Computron, the team's group dynamic allows them to create a super-intelligent gestalt whose mind and thought processes have been compared to "500 supercomputers." Although sometimes late when arriving at a conclusive decision, Computron's intelligence makes him the smartest and most strategic of the Transformers gestalts.

Since Computron is a gestalt, he is controlled by the Technobots' players when merged.