This page is an Autobot DC. 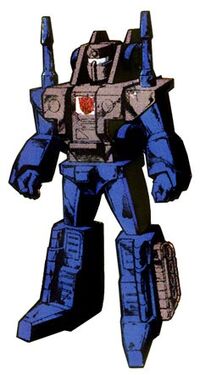 Cog is the combined robotic form of two of Metroplex's vehicular drones, Gasket and Grommet. Cog has no independent will of his (its?) own and is completely under Metroplex's control. Functioning as both mechanic and warrior, he allows Metroplex to be at other places while in city mode, as well as to interact with more normally-sized beings. He assists Scamper with perimeter security.

When the Decepticons took over Autobot City in 2014, Cog was one of the Autobots that guarded the trenches where the Autobots camped outside.

Cog is an NPC, and not available for application.