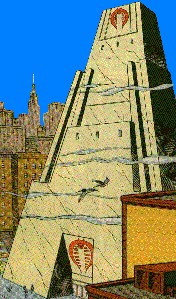 The Cobra Consulate building is Cobra's Embassy to the world. Situated in New York City, the Cobra Consulate stands out from its neighboring buildings with a unique trapezoid design. The building has come to be somewhat of a tourist attraction since its original construction in 1986, and is notorious for many situations that have developed both in and behind the public's eye. Only the first floor is available to the public, and security is high.

The Cobra Consulate building is a high-rise in New York City used by Cobra as a consulate-general and base of operations after Cobra Island was declared a sovereign nation. Its upper levels were destroyed in a battle with G.I. Joe, and the building was abandoned by Cobra for some time (save for a few late-night top-secret meetings).

On the MUX it was rebuilt and is used once again, first as Extensive Enterprises offices, and briefly as consulate for Cobra Unity before it had to be abandoned due to world-wide flooding.

In 2012, with the slow reclaiming of New York City, the Cobra Consulate has re-opened.

While the United States has no official diplomatic relations with Cobra Island or Cobra Unity, it is once again allowing Cobra to maintain a consul in the US to assist and protect Cobra citizens who are not wanted for any crimes. Cobra representatives have no diplomatic immunity, however, and any wanted Cobra personnel are still subject to arrest should they appear in the United States.