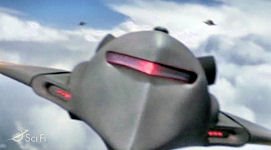 Using Vector Six as transport, I took the Baroness and her team of Alley Vipers to the site of the QinetiQ company's laboratory in Port Melbourne. Vector Six broke through the lab's network defences and downloaded their entire catalog of experiments and current working prototypes, then set a destructive virus loose in their computer networks.

Meanwhile, the Baroness led her Alley-Vipers into the laboratory to seize the hard-copy plans and schematics for the drone Cobra stole a few months ago. The drone's inventor was killed during the attack, and all but one of his team have been eliminated due to information gained from Intelligence.

Vector Six's armaments, coupled with the ordnance planted by the Alley-Viper team, effectively levelled the building. Cobra is now in possession of the only copy of the drone's schematics and development notes, as well as the unique prototype.

Port Melbourne, VIC - QinetiQ Systems' laboratory in Fishermans Bend was levelled Friday by a blast of unknown origin. Emergency responce crews recovered no survivors. Neighboring buildings belonging to Toyota Australia and Kraft Foods were damaged in the blast. Witnesses report having seen a strange, snakelike aircraft land beside the QinetiQ building some time before the explosion. QinetiQ Systems employed 210 people at the Fishermans' Bend site.

(Video report - The Cobra logo is replaced by the image of a Techno-Viper in full uniform. He stands before the camera, salutes, then gives a verbal report. His accent is clearly that of a New Englander, his manner colloquial.)

"Techno-Viper Hirst here. We've been working on implementin' a set of directives on the drone while keeping its AI and targetin' capabilities intact. Whoever programmed this thing is a genius: it's taken us months just to find the knot! Y'know, we kept following branches of code and they'd lead off one way or another, but never to the center. Now we've finally found it, and boy is it a mess. It's brilliant, but it'll take us a while to untangle it all without damaging the program."

A voice off-camera urges the Techno-Viper to "tell 'em!" Hirst clears his throat and continues.

"Uh, in the meantime, sirs and, uh, ma'am, we seem to have lost track of the drone itself." He chuckles nervously. "Yep, she just up an' went for a walk yesterday. And yes, we do have a tracker in place. Put a bit of code in there myself that would broadcast her GPS co-ords back to base. But wouldn't ya know it, the little devil's disabled that section of code! All by herself! She's a brilliant piece of technology, sirs, just brilliant." The Techno-Viper's face is impossible to read behind his helmet, but he pauses to chuckle and shake his head, almost as if this were a wayward child who's flown the coop instead of a multi-million-dollar artificially intelligent robotic drone. "Uh, so we have no idea where she is at this time. With permission, we'll send out a Techno-Viper team to find her. She can't've gotten too far. She's fast, but she uses up fuel pretty quick too. Not too many places to find the special grade of highly-refined fuel paste she uses, either. Took us a while to work that out too."

The off-camera voice shouts distantly at Hirst, who turns his head to look at the unseen speaker. "I'm jus' explainin' the fuel thing, Bartram," he says reasonably. "That way --" The shouter's voice rises and the words "my name" and "kill us all" can be discerned. The brief diatribe ends with the sound of booted feet running and a slammed door.

Hirst turns back to face the camera. "We'll find 'er, sirs and ma'am, don't you worry. Tam'll come home when she gets hungry, never fear. Hirst out." He reaches out to flick off the camera, and his image is replaced with the Cobra logo.

TO: Command
FROM: Baroness
RE: Drone Report
CC: Drone Team


Why in the hell was a GPS written into the code, and not hardwired into the drone itself? It should have been placed, independent of the software! I want those Techno-Vipers in my office, tonight!
If the drone is not found by that time.... I will not be happy.
The Drone will be found, and I want Mindbender and Brainstorm to be involved in the Drone Project.

(Received from an unknown source)

TO: Technical Division
FROM: Baroness
CC: Cobra Command, Wiretap
RE: Previous Incoming Transmission
I want this explained, and I expect it explained Immediately. What is the source of the transmission, where is it coming from, and more importantly, I want the transmission translated into ENGLISH, or UKRANIAN, not Techno-babble. Also, I want it done yesterday.

From: Techno-Viper 449
To: Command, CC: Wiretap
Re: Drone

Apologies for the delay, sirs and ma'am. We've started receiving computer transmissions from the field. The signature embedded in the transmissions would seem to indicate they're coming from the drone that escaped a couple of weeks ago.

We believe the message received indicates the drone has found evidence of Cobra Commander's passage - what the drone refers to as unit #1. According to its data he was headed north-northeast on foot from the vicinity of Battle Creek, South Carolina. Sirs and ma'am, the drone was not designed as a search-and-rescue unit and it may be returning data that has nothing to do with the Commander.