This article is about the evil terrorist organization determined to rule the world. For the single-engine attack helicopter models of the Bell Cobra family, Bell AH-1 Cobra. For Cobra TV, see the Cobra Network Television.

Cobra is a ruthless terrorist organization determined to rule the world. It is currently led by the ruthless Cobra Commander and Xamot, although others have at times usurped control. Cobra relies on the might of its legions of Cobra Vipers and Cobra Troopers to execute its diabolical schemes while trying to destroy its main enemy: G.I. Joe.

Cobra is publicly based out of Cobra Unity, in the Middle East on Earth. They still maintain a secret base on Cobra Island. 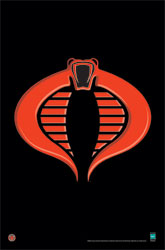 The seemingly nice little town of Springfield became the birthplace of a mighty paramilitary organization. A hate-filled man came to this town which has fallen on tough times and found an opportunity to start anew for both this man and the town. However, the direction he had in mind was far from normal. He began recruiting like-minded individuals with an axe to grind with the government. To fund their slowly growing organization, the group came up with all manners of pyramid schemes and went out to the rest of the United States. Along the way, they recruited more from outside and silenced those who posed a threat. Members are recruited based on their distrust of the government and motivation based on greed and power. Soon, their activities involved amassing arms and operations designed to subvert the US government. The man who started the organization now began calling himself the Cobra Commander. He named the group Cobra as his ambitions grow bigger and like a giant snake with its coils about the world. By the time they are recognized as a threat, the group has turned into a powerful private army and terrorist organization with footholds around the world.

Cobra made one of its boldest entrances into the world arena with the kidnapping of Dr. Adele Burkhart. Despite the high profile of the kidnapping, the group still managed to be a covert organization with authorities unable to make any form of infiltration. One of the first indications that Cobra has managed to make significant footholds in other countries is in the Joes' mission in Afghanistan. The Joe Team followed Cobra to a stronghold deep in Iran.

In 1997, Cobra schemed to reduce all members of G.I. Joe back to childhood and infancy in order to easily defeat them. The plan backfired, and many of the Joes (as well as some Cobras) were instead returned to young adulthood and their prime physical condition. If Cobra has managed to perfect this process, it is a secret known only to its High Command.

Cobra briefly allied itself with the Decepticons, and allowed Trypticon to be moved to Cobra Island in the interests of mutual defense. However, Cobra Commander and Megatron butt egos almost immediately, and soon the alliance was severed and the Decepticons moved on, although not before each learned much about the structure and technology of the other.

In 2011, Cobra took over the country of Al-Alawi, renaming it Cobra Unity. It was since become their primary base of operations, although Cobra Commander himself has not yet been spotted there. Later that year Cobra entered into a truce with G.I. Joe and the Autobots to stop the Decepticons from flooding the world.

In 2013, Cobra again allied themselves with the Autobots and G.I. Joe to repel Quintesson invaders from Earth.

Though the current structure of Cobra is unknown, information acquired from captured Cobra agents provided American authorities with a rough picture of how the group was organized. While the veracity of the information provided by ex-Cobra and the motivation for their cooperation are both disputed, American authorities base much of their current knowledge of Cobra on their testimony.

Cobra Commander is the Surpreme Leader and Senior Operations Chief of Cobra (although briefly this role may have been filled by Serpentor), advised by a High Command Council, which consists of senior Cobra members, estimated by Western officials at about six to seven people.

The Xamot is Cobra's Deputy Operations Chief and Sebastian Bludd is possibly the senior leader of Cobra on Cobra Unity.

The number of individuals belonging to the organization is also unknown. According to the BBC documentary The Power of Nightmares, Cobra is so weakly linked together that it is hard to say it exists apart from Cobra Commander and a small clique of close associates.

The lack of any significant numbers of convicted Cobra members despite a large number of arrests on terrorism charges is cited by the documentary as a reason to doubt whether a widespread entity that meets the description of Cobra exists at all. Therefore the extent and nature of Cobra remains a topic of dispute.

Its rank and file has been described as changing from being "predominantly American," in its first years of operation, to "largely international," as of 2007.

It has been estimated that 62% of Cobra members have university education.

When asked about the possibility of Cobra's connection to bombings in 2005, Metropolitan Police Commissioner Sir Ian Blair said:

"Cobra is not an organization. Cobra is a way of working ... but this has the hallmark of that approach.... Cobra clearly has the ability to provide training ... to provide expertise ... and I think that is what has occurred here."

In the Shattered Glass universe, Cobra is a peace movement began by Father Cobra.

Cobra's been around as a peace movement since probably the 60s and 70s, but only became known to the public in the 80s when a US government attack on one of their compounds resulted in the slaughter of dozens of the peacenik hippies. News reports indicate the hippies started it.

Cobra knows G.I. Joe are a bunch of brutes that work for President Colton. They know who the famous (to them) operatives are (Ebony, Snake-Eyes) but probably not everyone (same as TFU Cobra).

Cobra bought their own Caribbean Island as an escape from US persecution. However, they were unsuccessful in this attempt, as G.I. Joe bombed and invaded the island, slaughtering most of the citizens. Those that escaped now hide in Springfield, although with Lt Bludd captured by G.I. Joe, Father Cobra fears the worst and has been moving his followers to a new hidden base in Broca Beach.

Since the move to Broca Beach, Cobra has been laying low. Besides quietly supporting the anti-corruption presidential bid of liberal revolutionary Donald Trump, as an organization they've overall kept their head down and just tried to survive.

The United States was greatly divided during the Vietnam War. During this time, a young man sees his chance. Ten years after the war's ending, the paramilitary organization known as 'Cobra' seizes control of the government, having covertly established strongholds in every part of the country. The Cobra Commander now controls much of the Americas, having forged a strong alliance with the USSR. Dr. Mindbender has discovered the Ark, and has made drones of many of the Autobots and Decepticons found there, as well as using their technology to enhance their own vehicles and weaponry. A few remaining US patriots seek a way to reclaim their home.

In Decepticon WORLD, Cobra Commander is the brave commander of a worldwide secret militia determined to overthrow the Decepticons and restore Earth to human rule. They work closely with G.I. Joe, although Cobra is a little more likely to invoke collateral damage in the interest of saving the planet.

After the conclusion of the Second World War, General 'Robert Savage' speaks to the newly formed United Nations, and stresses the importance of not only a world diplomatic force, but a policing force. The General is placed in command of the UN's security forces, which are named G.I. Joes by the people. Under the Joes, peace is maintained and strengthened, and even though there are still seeds of discontent, the Joes faithfully and honorably defend the principles of peace and justice.