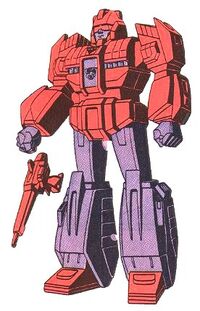 "Gravity is the chain that binds us all."

Nothing is good enough for Cloudraker. He's jealous of his clone brother Fastlane's popularity with beings of all types. He wishes he could scoot along on the ground like his brother does in dragster mode so that he could have more opportunities to interact with others, while at the same time he is terrified of being grounded. He flies as high as he can to escape this fear, yet he is eternally frustrated by his inability to reach escape velocity and achieve orbit. The fact that he is one of the fastest of all the Autobots does little to console him. Even soaring through the skies is a problem for him - an imperfection in his navigational systems afflicts him with claustrophobia. The skies are too small for him! Cloudraker is a mass of crossed circuits. And he'll need years of psychological debugging before he ever fully straightens out.

In jet mode, Cloudraker has a maximum speed of Mach 2.8. His range is 3200 miles. In robot mode he is armed with two gravity-rod rifles. By altering the strength of the gravitational field around any object their beams hit, the rifles can cause an object to either crash or float away. The larger the object, the less effective are the rifles.

All of Cloudraker's various abilities are hampered according to how emotionally distraught he is at any given moment. On the few occasions when he can put all his problems behind him, he is a very effective warrior. His major physical problem is a tendency to suffer "mode-lock" - the inability to transform from one mode to another.

Fastlane and Cloudraker served Ultra Magnus on Cybertron during the Lost Years. They now report to Elita One.

Fastlane and Cloudraker defend Cybertron unless called to Earth.

Cloudraker is available for application.