This page is for the evil Autobot from the Shattered Glass universe. For his heroic counterpart, see Cliffjumper. 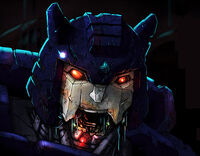 Cliffjumper was Optimus Prime's crack shot sniper, and possibly his most trusted friend and ally. In fact, he was a friendly and trusting individual in general provided you were not one of his enemies. (In which case he'll enjoy seeing you thrown into the smelting pool.) Unfortunately, he also tended to frequently end up being in the wrong place at the wrong time.

In his Porsche 924 Turbo mode, Cliffjumper was one of the fastest of the Autobots, and he made a particularly effective target for drawing fire away from other Autobots. It is a job he relished and seldom got hurt doing. He could fire projectiles filled with what he called "glass gas." On impact, this gas disrupted the microscopic crystalline structure of most metals, temporarily making the metal as brittle as common glass.

Cliffjumper was prone to literal blow-outs in his automobile mode. He accelerated so quickly and recklessly that he was sometimes disabled before he went 50 yards. His over-eagerness often led him into dangerous situations that he was not prepared to handle. And sometimes, if the wind is blowing toward him, he could fall victim to his own glass gas.

More than one Decepticon warrior ended up with a busted grill from underestimating Cliffjumper. He wasn't very strong, but no one was more determined.

Cliffjumper saved Optimus Prime's life during the Torus Heights battles. Optimus was deeply grateful for that.

When Optimus Prime sent "freelancers" to off Sideswipe in an ambush near Darkmount, Cliffjumper happened to be in the area, and accidentally got caught in the crossfire and killed.

When Alpha Trion and Dust Devil ventured to the Chamber of Omega Terminus to seek aid against the Old One, they were attacked by the re-animated corpses of Cliffjumper, Drench, and Hyperdrive.

Cliffjumper is dead, and so unavailable for temping unless one wants to play his re-risen corpse (which isn't, actually, out of the question).

In the Shattered Glass universe, Cliffjumper is dead.