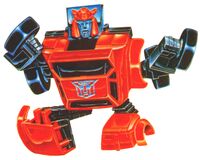 Don't be fooled by his small size: CLIFFJUMPER is as tough as they come. Always spoiling for a fight, just hearing the word 'DECEPTICON' is enough to get him riled up.

"Let me at 'em!" is Cliffjumper's usual response when the Autobots embark on a mission. His eagerness and daring have no equal among the Autobots. Optimus Prime knows this gung-ho trait is an expression of Cliffjumper's burning desire for vengeance on the Decepticons. Although he takes his work very seriously, Cliffjumper is full of good-natured bravado while he's doing it. He doesn't actively dislike Earth, but he considers its rough, uneven terrain a hindrance to his effectiveness, and too often is carelessly destructive. Often he is on the receiving end of a lecture from Optimus on caution and the protection of Earthen property.

In his Porsche 924 Turbo mode, Cliffjumper is one of the fastest of the Autobots, and he makes a particularly effective target for drawing fire away from other Autobots. It is a job he relishes and seldom gets hurt doing. He can fire projectiles filled with what he calls "glass gas." On impact, this gas disrupts the microscopic crystalline structure of most metals, temporarily making the metal as brittle as common glass.

Cliffjumper is prone to literal blow-outs in his automobile mode. He accelerates so quickly and recklessly that he is sometimes disabled before he goes 50 yards. His overeagerness can often lead him into dangerous situations that he's not prepared to handle. And sometimes, if the wind is blowing toward him, he can fall victim to his own glass gas.

More than one Decepticon warrior has ended up with a busted grill from underestimating Cliffjumper. He may not be very strong, but no one is more determined.

Cliffjumper was a part of the crew onboard the Ark when it crashed into Earth four million years ago during a search for new energy sources. His alt mode was reformatted into an oddly proportioned Porsche 924 Turbo.

When the Autobots awakened from their four million-year slumber, Cliffjumper was eager for action. He volunteered to tag along on Hound's recon mission to scout out Decepticons because he was itching to "boot some Decepticon right in his turbocharger." Though Optimus Prime's orders were only to find the Decepticons, Cliffjumper brashly tried to engage the enemy once Hound sniffed them out.

Cliffjumper aimed a rifle with his sights right on Megatron's head, however he missed his shot, and the Decepticons dispatched Laserbeak to chase off the Autobot eavesdroppers. Hound got pasted by Laserbeak's laser blasts and ended up requiring extensive repair from Autobot medic Ratchet after being pulled out of a ditch by Hauler. It worked out in the end, though, since Cliffjumper was remorseful for having acted without thinking, and Hound didn't hold a grudge anyway.

Soon afterwards, Cliffjumper made a very public display of his paranoia by accusing fellow Autobot and reluctant soldier Mirage of being a traitor on some very flimsy evidence, much to the (correct) disbelief of the other Autobots. He kept up his rhetoric even after Optimus Prime ordered him to can it. So determined was he to prove his theory true that he followed Mirage when the latter returned to the Decepticon power station to sow seeds of discontent within the Decepticon ranks. Fortunately, in the end it was proven that Mirage was a loyal Autobot all along, and Cliffjumper fell across Mirage's body, asking Ratchet to fix him for not trusting a comrade. This prompted a rather awkward laugh from the other Autobots present.

While pursuing Nightbird, the female robot ninja built to benefit mankind, Cliffjumper was the only Autobot unable to jump up the cliff after her. Ironic.

Cliffjumper was part of Jazz's army based out of Autobot City.

In 2021, Cliffjumper is assigned to the Ark.

Cliffjumper was played by ak005831 in 1998. He is currently available for application.

In the Shattered Glass universe, Cliffjumper (SG) is dead.

In the Decepticon World universe, Cliffjumper was one of the Autobots killed in the Ark Massacre.