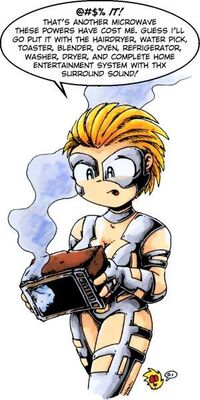 Josie Beller was a scientist who worked for G.B. Blackrock. She designed, among other things, an advanced oil rig, complete with defensive systems. When Shockwave and a Decepticon force attempted to take over the rig, she personally oversaw the counterattack. During the fight, she launched a harpoon at Shockwave, which managed to embed itself in his armor. Shockwave, in gun mode, pulled away, ripping off a large portion of the rig that was attached to the harpoon cable. He then tossed it back at the rig, and the ensuing electrical surge paralyzed Beller from the neck down, except for some movement in her right hand. After this incident, she created a bodysuit capable of storing and channeling enormous amounts of electrical energy. Also part of the suit was the ability to attract and repel metal, even to the point of being able to fly using ferrous materials in the ground. In addition, the suit enabled her to manipulate electricity in nearby machinery, even going so far as to let her control computers remotely. Finally, the suit replaced her damaged nervous system, giving her the ability to move about as before. Now calling herself CIRCUIT BREAKER, she set out on a mission of reveange against all Transformers who would hurt her or any other human.

When the Decepticons heard of the construction of Autobot City, they decided that in order to counteract the city Transformer Metroplex, they would need something of equal size and power, at least, in order to be able to win the war. Therefore, in a location far into the Himalayas, they began working on their own city transformer, one with a Tyrannosaur altmode, called Trypticon. They accomplished this by raiding humans for supplies and power sources, in areas the Autobots couldn't respond to fast enough.

For power sources to build this new base, in order to avoid Autobot interference, the Decepticons concentrated mainly on oil rigs out in the oceans, where the Bots couldn't swim to easily. Seeing this, some people began trying to use whatever weaponry they could get, in order to arm the rigs against attack. One such group was Blackrock Industries, which owned several oil rigs along the attacked oceans. Their chief technologist, Josie Beller, claimed that the defense system she had installed on the main rig was foolproof, and would make it unattackable. This boast was put on the television news and such, as a measure of ego for the corporation.

Since this claim was publicized in the way it was, Megatron and the Decepticons eventually heard about it. They laughed at the arrogance of the human making the claim, and decided that as a show of putting the humans in their place as to how weak they were, Megatron had Shockwave and a party go to the rig, on an energon raid. The radar monitor picked up the incoming force, and Beller decided to manage the counterattack herself. The Con force, however, was unforseeably large -- too large for the defense system to handle. Beller tried very hard, though. She fired a harpoon with cable towards Shockwave when he was incoming, to ward him off, but he pulled back, ripping away a good part of the rig, then swung back around to send it towards the defense console, to neutralize it totally. This caught her unaware, and when it shorted the defense system, it put a nearly fatal shock through her system, paralyzing her. The raid continued, and the Cons made off with every speck of oil they could get from it before the Autobots arrived.

Beller was found when rescue teams made it to the rig after the attack, they took her into the hospital, where she was visited by her employer, who apologized for what had happened, and offered to fund new projects for her.

Beller was furious about the attack, and the lack of immediate response for aid, as well as the failure of her defense system. Her condition made her think more to a way to be able to walk again, so she could get back into the universe, and get back at the ones who had attacked the rig, blaming all Transformers for it, since the Autobots didn't respond as soon as she would have wanted. Eventually, she created a bodysuit capable of storing and channeling enormous amounts of electrical energy. Also part of the suit was the ability to attract and repel metal, even to the point of being able to fly using ferrous materials in the ground. In addition, the suit enabled her to manipulate electricity in nearby machinery, even going so far as to let her control computers remotely. Finally, the suit replaced her damaged nervous system, giving her the ability to move about as before. Also, the suit's electrical ability could be used as a weapon, as well, draining nearby power sources, for high level blasts, effective against Transformers, which she set out with, intent to get back for her condition.

The continuing war has had definite affects on Circuit Breaker. For the longest time she was clearly and utterly berserk, attacking Autobots and Decepticons without mercy, also willing to fire upon anyone attempting to prevent her from going after either group. This pushed her to the status of being Public Enemy #1 in some places, including the United States, for a long time.

Eventually Circuit Breaker's anger ran out of steam essentially. And worse, Optimus Prime threatened her with his cannon, for being a threat to this troops. As much as this angered her, she was becoming worn out of her crusade, and tried to drop off the radar as much as she could. She attempted to re-enter normal society even, realizing now how much of her life her insanity had stolen from her.

At least until the incident with Luminous. That cemented Circuit Breaker's return to the wars completely, in the face of that new threat. It was there, also, where she met and came to care about the tiny Autobot named Tonka. She initially thought him a simple toy before scanning him, and when he was limp in her hands, she quickly dug for her tools to see what was wrong with the tiny one. He was not a 'threat,' and she didn't wish to be accused of harming him. He proved to be 'playing dead' and woke up to beg for his tiny life in the face of the tools. After reassuring him that she had no intention of dissecting him, she talked to him about situation with Luminous, and the possibility that they were there for the same reason, over the same issues.

After this discussion, Circuit Breaker began to actively assist Tonka in the situation to spy on Luminous and her operations, standing watch for him, attempting to assist if needed. During one harrowing point, Tonka was blasted by Starscream, and she took his unconscious little body back to her hotel, trying to repair him as much as she could and get him plugged in to the wall outlet to recharge.

After these events, Circuit Breaker has fallen almost completely into having to take sides in the war. She has attempted to improve her relationship with the Autobots,  even sometimes functions as a full ally assisting them in operations when the need arises. She is still a bit leery of them, but acknowledges especially now that they're a lot better than the alternative. This does not mean that she's totally fallen past her prejudices and phobias however, she will still not ride inside of one, and especially will not enter Metroplex.

Circuit Breaker also recently had been dating Lifeline, and at least tentatively tried to help G.I. Joe at least once, out of said relationship.

Beyond that, Circuit Breaker has been attempting to actually live some of her life outside of her battles against the robots. Is once again part of Blackrock Industries to some extent, though working on a far more loose basis.

This situation is presently under threat, as members of G.I. Joe, after Circuit Breaker attempted to help them again, are now pushing to arrest her for espionage and treason for attempting to coordinate efforts with them on their frequency. She has no intention of being incarcerated for that, she considers it a blatant farce. And if they attempt to do it forcibly, she is likely to defend herself. Luckily, Flint himself diffused the situation, dropping all charges and assuring Circuit Breaker she is a valued ally of G.I. Joe. She's been granted permission to use the Joe broadband in emergencies to alert them to danger or coordinate rescues, etc.

With that situation resolved, her attention was diverted back to other situations, mostly trying to stop the tectonic instability if possible. Also, she became aware of the situation with Spike, being transferred with the sale of Blackrock Construction, into the hands of Destro. She is well aware of Cobra and the problem they represent, and it prompted her to speak to Blackrock about it. Since that point, she is looking for him, to discuss possible employment away from the threat that Destro and Cobra might be intending to use him somehow to get at advanced technology from his association with the Autobots.

She has also been looking up Lifeline again, and resuming her relationship with him on a more active basis. His confirmation that she's still his girlfriend made her feel much better, though she had a minor incident a night or three later, when Sparkplug noticed her walking along the Seattle sidewalk, and nearly pitched a fit that she wasn't locked up in an asylum or cell, citing her hostility and placing Spike in danger in previous incidents. This could bode ill for her intent to try and 'rescue' Spike from being under one of the acting heads of Cobra, if possible.

In the middle of all these events, she also attempted to respond to the Decepticon takeover of O'Hare airport in Chicago. Unfortunately, she wasn't there soon enough to make any difference in the battle. Fortunately for her and others, however, when Megatron and Starscream made attempts to collapse the Sears Tower, she was in a position to attempt to shore up the structure and keep it standing, and be able to assist survivors.

Now... they set back down in Kansas... And she's wondering just when she'll have to act, to get them off the prairie, without an energon store big enough to conquer Earth and the galaxy potentially.

Circuit Breaker has, over the years on TF Universe, evolved to be a little bit different from the one in the comics. She's not necessarily the 'evil' she was portrayed to be in some of the comics by this point, and is certainly more selective of her targets than she was. She's working at Blackrock Enterprises again, and settled into more of a generally normal life...

But she's still potentially not entirely stable, depending on how situations go. Being incarcerated by G.I. Joe was a recent threat to that, had she been forced to defend herself and once again become the public enemy people remembered.

And as she was reminded of most unfortunately by recent events, there are some who still remember who she was before she vanished and calmed herself, and still hold it against her completely. Those who feel that she still is dangerous, and should not be allowed loose. As Sparkplug said when Slipstream pointed out she wasn't a threat anymore: "Anymore... until she pops her cork again." That risk is, unfortunately, still there.

In the Shattered Glass universe, Circuit Breaker is known as Sephie Beller.

Retrieved from "https://tfumux.fandom.com/wiki/Circuit_Breaker?oldid=75499"
Community content is available under CC-BY-SA unless otherwise noted.