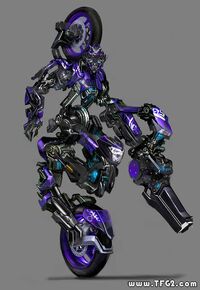 CHROMIA is one of Elita-One's most skilled and trusted field commanders. Her insistence on following orders to the letter is legendary, however, and she is often unwilling to re-interpret them in the face of changing circumstances. She is a ruthless fighter, but isn’t great at handling surprises – in such situations she tends to loose her temper and proper judgment.

In robot mode, Chromia carries a heavy laser pistol with enough firepower to blow a femme-sized hole in a wall, and her reflective silver armor is impervious against most conventional laser and light-based attacks. In her Custom Suzuki B-King motorcycle mode, she is faster than most Cybertronians, but has a no cargo space for carrying mission supplies or injured comrades. An excellent tactician and leader, she is infuriated when troops don't follow orders to the letter. In battle she’s likely to waste time with incriminations, and if the subordination is severe enough, execute troops immediately. In those cases, she is more of a danger to Autobots under her command than the Decepticons she’s been ordered to kill.

Chromia was an officer in the Iacon Elite Guard. When Prime rose up and began to slaughter her troops, Chromia did the sensible thing - she surrendered immediately and pledged her loyalty to Prime, executing the rest of her team herself to show her sincerity. Impressed by her audacity, he spared her life and assigned her to Elita-One's team, where she has been a loyal, if unimaginative, henchfemme ever since.

When Prime launched his Ark to Earth, Elita-One begged him to take her with him, wanting to get in on the glory and slaughter of a virgin new world. Prime refused, and even launched missiles into her direct location as she fought to defend the Ark while it was launched. Elita survived this attempted 'sacrifice,' and quickly marshalled her forces to take command of the Autobots on Cybertron before any other interlopers get the chance. Recently Alpha Trion contacted her and offered his help in cementing her rule by eliminating any other competition. With Prime gone, Alpha Trion is once more exerting his influence over her, becoming the shadow behind the throne. Chromia is backing Elita-One's grab for power.

Chromia is head of Autobot Infantry (SG) forces on Cybertron.

She was impersonated by her main-universe counterpart during an infiltration of Iacon, even though they look nothing like, because the Autobot guards were too afraid to question here. Those guards have since spent quite a bit of time in the Agonizing Rehabilitation Chambers.

Chromia is available for temping.