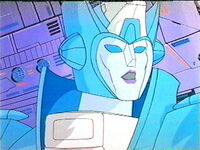 CHROMIA is one of Elita One's most skilled and trusted field commanders. Her flair for battlefield improvisation is legendary, and she is very good at interpreting orders to best fit a changing situation. An experienced combatant, she is fluid in handling unexpected circumstances and compensating immediately. In robot mode, she carries a heavy laser pistol with enough firepower to blow a femme-sized hole in a wall, and is armored against most conventional attacks. In cybervan mode, she is slower than most Cybertronians, but has a large cargo space for carrying mission supplies or injured comrades. An excellent tactician and leader, she often gets frustrated when troops don't follow orders to the letter during missions. However, she doesn't waste time with recrimination; she merely adapts and takes the necessary steps to complete her goals.

Chromia was one of the Autobot leaders who stayed behind and waged a secret war against the Decepticons while the Ark crew slept on Earth. She was one of Elita-One's most experienced veterans and closest friends.

Except when needed on Earth, Chromia remained an Autobot Field Commander on Cybertron.

In 2012, needing a scan of the Old One's Stellar Spanner in order to build a machine to close the rifts between the Shattered Glass universe and his own, Alpha Trion conceived a plan to lure the Old One out of Iacon so he could send in Chromia and Firestar to infiltrate the Autobot base. Alpha Trion and Dust Devil successfully lured the Old One away from Iacon, and using fake IDs programmed by Alpha Trion, the femmes were able to slip easily past Autobot guards Flattop and Subsea and venture into the city. After some minor run-ins with some additional SG-Autobot guards, Firestar and Chromia were able to successfully scan Old One's Stellar Spanner and return the schematics back to Alpha Trion.

When Chromia and Firestar returned with the scans, they brought a mortally injured Frenzy (SG) with them. Chromia vowed his death would be avenged, but Frenzy stressed his wish to have no more bloodshed. Though Alpha Trion wasn't able to heal Frenzy's injuries, he was able to alleviate the pain he suffered from his injuries, and as a result, Frenzy died a peaceful death, surrounded by a new group of Autobot friends with Chromia was comforting him. Frenzy's last request that his remains to be taken back to Alpha Trion's world, but although he passed along Frenzy's wishes, he handed over Frenzy's body to Starscream and Windshear to make the final decision.

In 2013, Prowl was moved to the general command pool to assist running all Autobot operations while Optimus Prime was offworld. Chromia was promoted to full commanding officer of Infantry, and named Roadbuster her XO.

In 2014 Chromia was contacted by Arcee and asked to send more supplies to Earth to help rebuild Autobot City. Chromia committed the supplies and offered to help personally if possible in the reconstruction.

In 2015, Chromia tried in vain to keep Starscream from using her mentor Alpha Trion to bring back Megatron from the dead. When she heard Alpha Trion had given his life, she swore revenge on Starscream and vowed to make him pay.

Later that year she was part of the maiden voyage of the ill-fated The Spirit of Freedom.

In 2018 Chromia was with Windblade when they were attacked by Banshee and Starscream. Chromia failed to protect the Cityspeaker and Windblade was captured.

Chromia is head of Autobot Infantry, and XO of all forces on Cybertron.

Needing a scan of the Old One's Stellar Spanner in order to build a machine to close the rifts between the Shattered Glass universe and his own, Alpha Trion conceived a plan to lure the Old One out of Iacon and send in Chromia and Firestar to infiltrate the Autobot base. Using fake IDs programmed by Alpha Trion, the femmes were able to slip easily past Autobot guards Flattop and Subsea and venture into the city. After some minor run-ins with some SG-Autobot guards, Firestar and Chromia were able to successfully scan Old One's Stellar Spanner and return the schematics back to Alpha Trion.

draw off the Old One so the Femmes can attempt an infiltration.

<< Autobot symbol appears for a few moments before fading and showing Chromia sitting in a chair in Medical on Moonbase 4. A few moments pass as a medic works on her shoulder before she starts speaking >>

"Since it had been a bit since Flareup had been assigned to Moonbase Four and no explosions of any kind had been reported I felt it was time for a surprise inspection of the Moonbase so I tasked Firestar to occupiany me on the inspection. But those plans became irrelevant almost immediately on arrival."

<< A image pops up showing Warworld showing up... as well as it's opening shots which cleanly missed the Shuttle Dominance. >>

"Upon their appearance, Firestar returned to the Dominance and Flareup manned the defenses while the other Autobots assigned to the base reacted to the limited damage that was done during the weapon exchange, for which both Firestar and Flareup should be commended for their marksmanship during the fight. It was not long before Valour exited the Warworld but retreated after exchanging a few volleys of fire and in-close blows with myself... missing a large chunk of his face."

"Thanks to both of their efforts the Warworld was driven off with light damage to both the Moonbase and the Dominance, as well as light damage to our numbers, the light damage I took being the worst among the Bots there. The Base is secure, the light damage done is being repaired, and Flareup failed to blow up something of ours at any time so it was a good day overall where battle is involved."

"And Flareup? We will be having that lesson on comms etiquette here shortly, do not forget.. and Dust Devil, where are my weekly reports!"

<< She finally taps it the report off as the medic growls at her to keep still, the Autobot symbol flashing up and spinning a bit before fading to black >>

The Fallen TP Finale -- the big bad himself shows up looking for his Blaster.

She crosses her arms as she starts to talk, "As you commanded I've ordered most of our still active combat forces to Iacon from every location I can without compromising our other locations' safety, Optimus, or at most a bit under where I would prefer they be.. after all Iacon stands as more important to our people, if it should fall our forces morale would suffer greatly. And I've given orders to most of those locations that should they be truly pressed they are to withdraw rather then stand and fight." Scrolling down the right side of the screen are a long series of orders shuffling all those on Cybertron around, mostly to Iacon, a few to other locations as she tries to balance those forces still deployed.

She pauses and collects her thoughts before she continues, "However I do not believe going totally defensive would be advisable so I have given orders to Springer to take his Wreckers... and well do what he does best, disrupt the Decepticons as much as possible. Nothing to provocative but enough to hopefully force the Decepticons to devote forces to defending other possible targets. I will keep a eye on both the forces here and those located outside Iacon and keep a rotation going so all have a chance to watch over Iacon as well. Chromia, out."

<< Spinning Autobot Symbol reappears and the report fade to black >>

Cerebros, Spike, and Fortress Maximus all consider what could have gone better.

She places her hands on the desk as she looks at the screen, "This is to the High Command and for general information of others. With the recent reported incident in Manganese Mountains I have placed Sideswipe and Sunstreaker on restricted duty, neither are to leave Iacon until this matter is settled, which will be quick hopefully. I have sent a team of investigators to look over the scene to gain more information hopefully. In the meantime I have spoken with Sideswipe and taken his side of the issue and will be putting out a order for Starlock's temporary return so I can acquire her side of the incident as well before any final orders or consequences of the incident are decided." She reaches out and taps something on her console.

<< Spinning Autobot Symbol returns for a few moments before it fades >>

After being temped for a while by Bzero, Chromia is now played by Agollo.