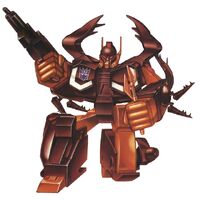 CHOP SHOP is the sneakiest of the Insecticons, rumored to be even more underhanded than Kickback. He is the consummate thief -- if it's not bolted to the floor, it's not safe from his greedy grasp. He can carve up a moving bus and haul away its engine block before it rolls to a stop. And he can do all this while at his small insect size. Easily the sneakiest of the Insecticons, Chopshop prides himself on his subtle talents. For Chop Shop, no challenge is too great; the more difficult something is to steal, the more he wants to steal it. Once he targets an object, it's as good as gone. And once he has it he will disassemble and reshape it with the consummate skill of a brain surgeon to fit it to Decepticon needs. Considering his formidable skill and experience, more often than not he's completely successful.

As a robot, Chop Shop has phenomenal physical dexterity, and his powers of prestidigitation are stupendous. He defends himself expertly with a telescoping power-spear which he can electrify to stun opponents if needed. As a backup, he carries a high-powered photon cannon which can blind as well as blast opponents, and is quite adept at martial arts, although he prefers to get in and out without being seen rather than risk a confrontation. As insect, he can fly in near silence up to 30 mph with two small jets on his back. His range is 250 miles. In this mode, his pincer-like antennae can slice through 2-inch thick vanadium-steel plate. He can also use twin pinpoint lasers that protrude from his mouth assembly to carve up objects that require more precision. He can lift up to 30 tons with his six clawed legs, even while insect-size. He can operate as an insect at either insect or normal size.

Chop Shop is motivated by the thrill of danger more than Decepticon ideology. It's often rather difficult to get him to use his skill for anything other than excitement and personal gain. Skilled and smart, Chop Shop prefers to rely on intelligence and stealth to achieve his goals; if he's somehow cornered, his lack of a speedy altmode can make escape rather difficult. His tremendous ego sometimes leads him to taking on a challenge that is too great for him, resulting in his eventual defeat. Frequent mechanical breakdowns in his legs are a result of his carrying off heavy objects during his burglary operations. The threat of capture, however, only increases his enjoyment of the caper.

Chop Shop and the Deluxe Insecticons remained on Cybertron during the Lost Years, and didn't transfer to Earth until 1985. Chop Shop reports to Venom first, and to Shrapnel only in emergencies.

Chop Shop and the Deluxe Insecticons remain active on Earth under the command of Venom.

Chop Shop is available for application.