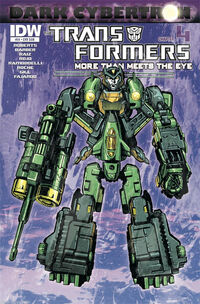 Centuritron is a Mini-Con combiner.

Centuritron is a natural leader. If the rumors are true, he has the power equivalent to 100 warriors, which is presumably how he got his name.

He is the combined form of the three-members of the Mini-Con Assault Team:

Centuritron is a massive, broad-shouldered warrior. Antennae spout from the back of his head, keeping him in contact with his Valvoluxian people at all times. His upper chest is formed from the cockpit of a helicopter – his midsection is the cockpit of a fighter jet. His carries a double-barrelled cannon with an attacked sniper scope and mini-gun. His legs are long, ending in toegrips that keep him stable in combat. Overall Centuritron is charismatic, huge, and deadly.

Centuritron came up through the ranks in Valvolux, starting as factory workers, and graduating to security. They are proud of their home and ready and willing to defend it.

In 2019, Centuritron got into politics and challenged Knightmare for leadership of Valvolux. However, he was publicly beaten by her in the arena, and forced to retreat to the Sonic Canyons.