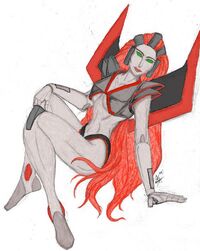 CENTERFOLD is the oft-annoyed acting commander of the Decepticon medical staff. She's had to endure countless insults from others, and is finally fed up. She performs her duty, but makes sure those that give her trouble don't enjoy the treatment. Having been fairly well known from her past work on Cybertron, she has had to endure constant harassment from 'con troops. Sometimes she's been known to refuse to evac or treat injured troops, simply as repayment.

As a shuttle, Centerfold has six full-service facilities to aid injured Decepticons, as well as first aid stations for a half-dozen others. In robot mode, she carries a dual-action ballistic/laser pistol, and isn't afraid to use it on anyone who gives her trouble - friend or foe. As a shuttle, she fairly agile, and is armed with plasma ejectors and anti-personnel rockets. Her attitude doesn't win her many friendships, but her skill is undeniable.

When Centerfold joined the Decepticons, her past work on Cybertron Before the war led her to endure constant harassment from other 'con troops.

Centerfold is no longer acting CO of Decepticon Medtech.

In the Shattered Glass universe, CENTERFOLD is a brilliant scientist, specializing in subspace and transwarp technology. Once she starts working on an idea she is tenacious, ignoring almost all else until she has the beginnings of a solution. Her body is twisted and hunched from lab accidents and self-experimentation, but she seems not to notice - she doesn't have time to get a new body, and appearance doesn't matter to her anyway. She possesses a built-in spacefold core that in robot mode allows her to teleport short distances and in starship mode allows her to instantly cross vast tracts of space. She is lightly armed, except when she's testing prototype weaponry, in which case she's as likely to be a danger to herself and her allies as she is to her enemies. However, her contributions to Decepticon science are extensive, and she has the respect of most of her colleagues even if they have a hard time looking at her half-melted face.