View source
watch 01:25
Jurassic World: Dominion Dominates Fandom Wikis - The Loop
Do you like this video?
Play Sound
The name or term Arkeville refers to more than one character or idea. For a list of other meanings, see Arkeville (disambiguation). 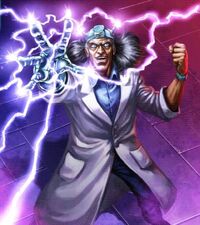 DR. ARKEVILLE is the quintessential mad scientist. His genius far outstrips his moral caliber, and he wouldn't hesitate to stab anyone in the back in his pursuit of knowledge and power. He is one of the world's top researchers of behavioral control, and his understanding of hypnotic implant devices rivals that of Dr. Mindbender. He is also well-versed in experimental energy technology. A well-known traitor, DR. ARKEVILLE sold out his own race for power, and had few friends outside the Decepticons -- and many enemies amongst them. Only his usefulness to the Decepticon cause assured his continued existence. Now that he has sold out the Decepticons as well, only the protection of the Autobots has kept him alive. His frail body, kept alive with the help of advanced cybernetics, is weak, but his mind is dangerous and unpredictable.

Dr. Arkeville is an old man kept alive by technology and hate. An electrified skullcap has enhanced his intelligence to, if you ask him, super-genius levels. Bushy white eyebrows flare over narrow, dark eyes. He’s tried to grow a beard, but the results are patchy and sad. His right hand and most of his right arm have been replaced with an advanced steel appendage. Any other modifications are hidden behind a business-casual wardrobe and a long white lab coat.

Dr. Arkeville is seated in his hovering battle platform. Transformer-grade Cybertronian steel armor covers his left arm, half his torso, and both legs. His metal skullcap has been wired into a glowing blue eyepiece that serves as a targeting site for the many, many weapons built into his flying chair. Manipulator arms extend from the sides of the platform, for conducting experiments or defending Arkeville himself. There is a mad look in Arkeville’s uncovered right eye as his cybernetic right hand clenches in insane mania.

Kemal Amen "Casey" Arkeville was born in Detroit, Michigan, on April 27, 1932, to Lebanese Druze immigrant parents who had settled in Michigan where they worked as grocers. Arkeville was named after Turkish leader Mustafa Kemal Atatürk, a man Arkeville said his father respected.

In the 1940s, "The Adventures of Superman" reportedly inspired Arkeville to reach higher and to aspire to greater things than being the son of a grocer. Arkeville received his first experience with science at Northwestern High School in Detroit. He then went to Wayne State University for college. While at Wayne State, he furthered his studies in science and graduated early at the top of his class. In 1952, Arkeville was drafted into the U.S. Army and sent to Korea. There, he worked with the US Army Corps of Engineers. After the war he earned his degree at the University of Michigan Medical School, and spent the rest of his life studying various esoteric projects of his own, slowly alienating himself from both his friends and both the medical and scientific communities.

In the 1980s Dr. Arkeville was offered the chance to rule the world by Megatron, in exchange for the Decepticons using his hypno-chips to hypnotize humans to use as slaves. When Megatron then revealed the first part of his plan to Arkeville — to transport Cybertron into Earth's orbit via space bridge and create energon from the natural disasters it would cause — Arkeville was hesitant. Megatron just ordered him to send his slaves to defend the space bridge from the Autobots, who refused to fight back against humans.

However, when Soundwave used his audio disruptor waves, the hypno-chips malfunctioned and the slaves escaped. Arkeville told Megatron he needed new ones, and the Decepticons started abducting people from around the world to collect energon from the disasters. When Megatron sent one slave to Cybertron, Arkeville told him that he couldn't control his slaves if they weren't on Earth, but got the response that his control computer had already been replicated on Cybertron.

Arkeville then heard about another plan of Megatron's: to let tidal waves slam into some of his generators, creating large amounts of energon. He protested as this would drown all the slaves working near the generators, but Megatron just mocked him and added that he should stay away from Cybertron. Arkeville started pondering if Starscream may be the ally he really wanted. Whether or not he made a decision didn't matter, as Starscream just kidnapped him after Megatron had left him to drown in the tidal waves with his slaves. Starscream proceeded to drain energy from Arkeville's brain so he could power himself up and take control of the Decepticons, but was discovered by Megatron. Luckily for him, the remaining slaves started malfunctioning due to the Autobots' tampering, which distracted Megatron and let Starscream escape with Arkeville.

Starscream and Arkeville took off to Arkeville's secret lab (which was opened by Arkeville saying "Open Sesame"), where the doctor warned Starscream not to mess with his Exponential Generator, as it could destroy Earth. Starscream promptly programmed the generator to reach its maximum capacity in eight hours, planning to absorb the energy from the planet's destruction. Arkeville didn't like this idea one bit, and suggested that he stay behind and make sure "nothing goes wrong," only to be knocked down and brought along to Cybertron. Out of Starscream's sight, Arkeville tried to stop the generator via computer, only to receive a severe electric shock which knocked him unconscious. He later woke up strapped to a table, having been rebuilt more fully into a cyborg by Medicroids in order to save his life.

When the explosion failed to happen as expected, Starscream tried to order Arkeville to Earth to investigate, only for the scientist to sarcastically remind him that he was immobilized by a mechanical chair. Grinning evilly, Arkeville noted that Starscream was the only one who knew how the timing mechanism worked, and that HE was the one who had to go to Earth.

When Arkeville recovered from his injures, he was rebuilt to a more mobile version of his cyborg body. He continued to work with the Decepticons, although his lack of interpersonal skills led him to be nearly killed on several occasions.

In 2005, he secretly joined Concurrence, and has been dedicated to destroying the alliance between Earthlings and Autobots and driving all Transformers from Earth. The Decepticons are thus far unaware of these activities.

In 2013, Arkeville studied the Transorganics, and came up with a method he believed would control them. However, he was attacked by one of the transorganics before he had a chance to fully deploy his method, and wound up blasted unconscious by a too-close grenade blast in Los Angeles.

In 2014, Arkeville developed a new nanovirus that could lock Transformers in their altmodes and reduce them to drone-level intelligence. He infected Deadfall, who initially didn't seem to be infected, and Typhoon, who succumbed to the desired effect. Arkeville eventually created a cure for the virus as well, and cured the Decepticons who had been infected, including Lord Megatron.

In October of 2014, a small team of Autobots and G.I. Joes infiltrated Decepticon City to capture Dr. Arkeville and rescue Typhoon. Arkeville soon sold out the Decepticons in a scheme to keep his freedom to work while using the Autobots as his personal bodyguards against Decepticon retaliation. In a deal brokered with the EDC, the Autobots, and Dr. Arkeville, the doctor agreed a house arrest agreement under the condition that any escape attempts will result in him being turned over to G.I. Joe and later the high-security facility SuperMax, where he'll face trial for his past crimes.  As part of this agreement, Arkeville provided a cure for his virus, which at the time was affecting Metroplex, allowing the Decepticons to hold Autobot City.

In November 2014, with the help of Dr. Arkeville, the Autobots were able to retake Autobot City. Dr. Arkeville was moved into a human-sized brig where he now resides. He currently is doing experiments for the Autobots, but they are under heavy scrutiny from Wheeljack, First Aid, Sparkplug, and Spike .

In 2016, Spike conferred with Crosscut about whether or not to give Arkeville over to G.I. Joe for detention. However, since Dr. Arkeville had not violated any clause of his agreement with the Autobots to help take back Autobot City, any move to surrender Dr. Arkeville to the Joes would make it appear that the Autobots went back on their word. Spike thought that would do irreparable harm to the Autobots in the eyes of the world, even for someone like Dr. Arkeville. Having concluded that (and much to Arkeville's luck), the Autobots decided to keep him.

However, soon after Arkeville attacked Spike physically, threatening his agreement with the Autobots. In response, after a failed escape attempt, Arkeville and several other high-profile prisoners were moved to The Coffin. Once there, Arkeville's prosthetics were removed and he was immediately imprisoned in solitary confinement in punishment for all of his crimes, large and small.

In 2019, Arkeville was freed from the Coffin by Evil, Inc and offered a job. He accepted.

On the MUX, his full name is Kemal Amen "Casey" Arkeville, after his voice actor. In the Shattered Glass universe, his name is Henri.

Dr. Arkeville has famously been played on the MUX by Drake Fenwick, who had him grow a patchy beard. Lo the character development!

Since then he's been temped by bzero. However, Arkeville is currently available for application.

In the Shattered Glass universe, he is known as Professor Arkeville.