View source
The name or term Carly refers to more than one character or idea. For a list of other meanings, see Carly (disambiguation). 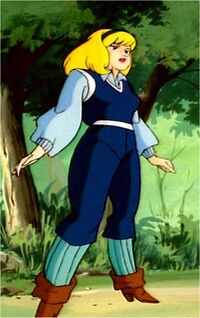 CARLY WITWICKY has few peers in the field of computer engineering. Courageous, hyper-intelligent, and able to determine multiple outcomes to complex problems with ease, Carly is one of the most versatile allies of the Autobots. Carly was originally more interested in the Autobots than in Spike (to Spike's dismay), although she always appreciated his friendship. Like Chip, Carly's scientific knowledge is great, but it extends more in the chemical/electrical/mechanical areas of science than computer knowledge. Carly is almost too self-assured, and her curiosity often leads her -- and Spike -- into dangerous situations. Impulsive and apt to act on her own instincts, Carly often disappears from the others with a plan of her own -- usually some bold, bordering-on-foolish attempt to aid her friends. She eventually married Spike, and with him, had two children, Daniel, and Megan.

Born in St. Paul, Minnesota, Carly Banas first met Spike and Bumblebee at the Robots Video Arcade. Although Spike was younger than her by two years [1] and not nearly as bright (Carly was attending MIT while Spike still wasn't even old enough to drive), she became immediately intrigued by him and his friendship with the Autobots. After befriending crusty old Ironhide and helping save the Autobots from the threat of the Immobilizer, she was accepted as their new human buddy. While Spike was initially less than thrilled that she seemed more interested in the Autobots than in him, he gets over this at the end, inviting her out for milkshakes.

Carly and Spike later went on a dangerous mission to Cybertron to retrieve more Cybertonium, an element the Autobots needed to survive. Carly's technical know-how once again proved useful as she, Spike and the Dinobots outwitted Shockwave and stole some Cybertonium. She was very impressed with Cybertron's design and layout. Unfortunately, the trip had several drawbacks; among them, Shockwave disintegrated her car (Decepticreep!), and she twisted her ankle.

Carly's work takes her all over the world, leaving Daniel most of the time in the care of her husband Spike. In 2003 she was hired by Idea Enterprises to create cutting edge technologies, and through them she partnered with Sumdac Systems from 2007 through 2009 and Symultech from 2010 through 2013.

In March, Carly volunteered her computer-savvy services to work with the EDC on their first mission. On April 22, Carly traveled with the EDC to Trucial Abysmia to free celebrated human rights activist Anwar Assan from his captors.

In the summer of 2013, following a disastrous run-in with the Decepticons, Carly jumped ship from her current assignment out of fear of losing her contract, and went to work for GB Blackrock instead.

On April 7, 2014, Carly attended the handfasting of Spike's brother Buster Witwicky to Jesse Macchio. Even though she doesn't particularly like Buster, Carly cried through most of the ceremony.

In October of 2019, Carly was made Acting Commander of the EDC while Marissa Faireborn was on medical and then maternity leave.

On the MUX, her full name is Carly Arlene Banas-Witwicky. She works for Blackrock Industries.

I was on assignment with my company in the Yukon, testing some unusual energy readings which appeared to be possibly from illegal fracking activity. As it turned out, that wasn't what was going on at all, but I encountered some Decepticons who were hanging around an old abandoned industrial plant. Buzzsaw and Plunder harassed me for a bit, trying to take my equipment, coat and bike, which I refused to let them have.

Then, things got *weird* really fast. The two of them began fighting amongst themselves, and it left me open to attempt an escape. While I was trying to get my equipment back into the case, however, in my haste I packed up Slugfest. This turned out to be really bad, because my getaway was...considerably hampered by Buzzsaw attacking, and this ridiculously idiotic stegotape refusing to get off my bike! I called for assistance and Skydive responded. In the ensuing rush to get Slugfest OFF the bike, I ended up having to give up my equipment cache to him. So basically...the Decepticons now have my work research into new fuel alternatives. The whole project is a bust.

I feel very badly about this, but this is something I have to answer to my employer about. No one was injured, thankfully. And I'm grateful to Skydive for providing me an exit out of that mess.

For years, Carly was temped by Doomflower or @emited by Spike's player, but she is still available for application. In the meantime, she was taken over in 2016 by Cloudgrazer.

In the Shattered Glass universe, Carly Banas has thrown out her no-good husband Spike Witwicky.

When Spike Witwicky died, Carly was on Vrob.

Witwicky What If? Universe

In the Witwicky What If? Universe, Carly is chief research scientist for Blackrock Industries, and Mr. G. B. Blackrock and she are married.