This page is for the Shattered Glass selfdestructive loser. For her heroic main-universe counterpart, see Carly. 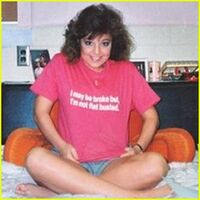 "Whatever you think is best, dear."

CARLY BANAS used to be Spike Witwicky's wife, and let that define her existence. Carly was originally more interested in Spike as a friend, but wound up marrying him to make a rebellious statement to her folks, who wisely didn’t like him. Like Chip, Carly's computer knowledge is great, but her lack of assertiveness has kept her from advancing very far in her field. Carly is not very self-assured, and does anything to avoid dangerous situations. Cautious and afraid to act on her own instincts, Carly is drawn to bold men, who she allows to control most aspects of her life. After ending things with Spike, she took up with a new boyfriend, Cain, and set to repeat the exact same patterns.

Now on her own since Cain's disappearance, Carly works as little as possible while she "recovers" from her detention by G.I. Joe.

Carly Arlene Banas was born in 1974. Although naturally bright, she was held back a few years simply because she failed to apply herself, interested much more in boys and fashion. When she met her future husband Spike Witwicky she was originally more interested in him as a friend, but married him to make a rebellious statement to her folks, who wisely didn’t like him.

Years later, while working as a computer programmer for InfoTec, she eventually kicked her no-good soon-to-be-ex-husband Spike out, and filed for divorce.

After ending things with Spike, she took up and moved in with a new boyfriend, Cain, and set to repeat the exact same patterns.

Deadline, a Joe operative, set his sights on seducing Carly, mostly because she was there, and he could.

With some major convincing coutesy of Cain, Carly agreed to have Daniel sent to boarding school. Daniel had routinely acted up, mouthed off to both Carly and Cain, and harbored a deep-seeded hatred for his father, Spike Witwicky. Later, lonely, regretting her decision to abandon her son, she secretly longed for visits from Deadline. Tired of being belittled by Cain, but unwilling to leave him, she became a willing recipient to Deadline's affections.

For a time Carly believed Spike was dead, killed by her boyfriend Cain. She put her son Daniel in boarding school, a decision she immediately regretted. She then started sleeping with Deadline behind her boyfriend's back.

When Ebony came to Carly's house looking for information on Goldbug, Cain fought back, and got beaten, shot, and stabbed for his trouble. During the confrontation, Carly found out that Spike was still alive and in G.I. Joe custody. Cain escaped, but Carly was taken to the Pit by Ebony.

Since being released, Carly has hired a laywer and has routinely fought going back to work, citing "emotional trauma" as a reason. At the same time, she has shown little to no interest in regaining custody of her son from boarding school, opting instead to hang out shopping, eating and drinking with other housewives from her area in sort of a "Real Housewives of Cleveland" lifestyle. She managed to piece together enough cash to hire a lawyer, who has threatened to sue the InfoTec if they ask her to go back to work.

Unfortunately, she has since had to relent and return to work on a part-time basis while she "heals." Nearly two years after being captured, she has shown no signs (or willingness) of recovering from her "emotional wounds". In response to her son's pleas to return home, Carly keeps reassuring Daniel "I can't be a good mommy until I'm all better."

In 2012, Carly began sleeping with her lawyer. Blaming a "full relapse" - she has since quit her job at InfoTec and has sued her former company for $2.2 million for creating a "distressing work environment" that ignored her "anguish" after her capture from the Joes (despite the fact her boss gave her a six-month paid leave and her medical plan included counseling and medication for such traumatic events. Carly claimed shopping was a better form of therapy). A $2.2 million settlement should be enough to tide her until she finds a richer husband.

On the MUX, her full name is Carly Arlene Banas-Witwicky. Banas is her maiden name.

In the Shattered Glass universe at least, she has a port wine birthmark on her thigh.