View source
This article is about the evil Shattered Glass raider - for this heroic main-universe counterpart, see Benin-Jeri. 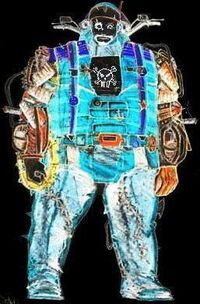 CAPTAIN MAL-FEASANCE is a dread pirate whose cruelty known throughout the galaxy. He captures ships, strips them of their fuel, parts, and resources, and then executes and recycles the crew. He claims leaving anyone alive gives the impression he’s gone soft, and after that piracy becomes nothing but work, work, work. Capt. MAL-FEASANCE is an excellent swordsman, but doesn’t rely on hokey religions and ancient superstitions when he has a blaster in his hand. As a Junkion, his ability to withstand injury is legendary, and he isn’t above pulling a Wreav-Arr and replacing missing limbs with those liberated from his opponents. In his pirate ship V’Ger, MAL-FEASANCE has laid waste to entire worlds, and yet little seems to appease his hunger for destruction and riches.

Captain Mal-Feasance is a dangerous-looking creature, composed of sharp, rusty motorcycle parts combined haphazardly into some sort of robot warrior. One of his optics looks as if it has been cut out, and rather than replace it a patch of spare metal has been welded over the gaping hole in Mal’s face. His barrel chest is covered with scars from numerous battles, and his arms are thick and powerful, composed of engine parts from a dozen vehicles. His legs are stout and strong, covered in ripped leather stitched together in layers. Mal carries the hilt of a laser sword at his side, next to his trusty blaster. The glint in his optic and the smirk beneath his black-metal mustache give him the look of the criminally insane.

Mal-Feasance initially steered the V'Ger into deep space near Shattered Glass Cybertron, seeking to attack any ships that attempt to leave the planet before it entered the Plait Expanse. Following the Autobot Warship Ark and the Decepticon Interceptor Nemesis to Earth, on September of 2010 Capt. MAL-FEASANCE launched an attack against the Nemesis. Mal rammed the Nemesis with the V'Ger, and he and his crew swamped aboard, slaughtering all in their wake. While on the Nemesis Mal freed the prisoners Jetfire and Trailbreaker, and continued his rampage until stopped in battle by Deathsaurus. Mal was forced to withdraw, retreating to the far reaches of the Sol system to prepare for his next assault.

Later, Mal used the V'Ger's space-folding drive to teleport past the Plait Expanse into orbit around Cybertron, and descended down the planet to prey. Picking up the presence of Weatherbots outside the Temple of Knowledge, Mal swooped down and attacked, only to face reinforcement in the form of Alpha Trion, Dust Devil, Professor Razorclaw, and the rest of the Weatherbots. His crew defeated, Mal was forced to retreat into the mountains, leaving his ship in the hands of the Autobots.

In 2013, Puddlejumper encountered Captain-Mal in Kaon, who fired on her immediately. She returned fire, successfully driving him off.