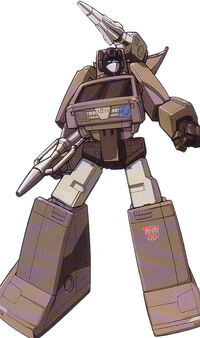 “The road is no place for the weak.”

Unlike others who travel the highways of Earth, CAMSHAFT has no fear of car accidents, and with good reason: his lightning-fast automated reflexes allow him to pulverize any vehicle that approaches within 4 inches of his metal frame. The arrogant confidence he has about his own safety often leads to reckless driving, about which Optimus Prime is not too happy. Camshaft doesn't share his leader's concern about the lives of his adopted planet's native inhabitants. But there's no doubt in Optimus's mind that Camshaft's aggressive nature is a boon in battle against the Decepticons, and Optimus is reluctant to come down too hard on Camshaft if it might change that.

In Mazda Savannah RX-7 mode (which, being a rotary-engine car, ironically lacks a camshaft), Camshaft's rear fenders can piston outward, slamming into anyone driving next to him. His rear window and trunk also rotates into a high-energy plasma beam projector with a range of 2 miles. The same weaponry is available to him in his robot mode, supplementing his powerful fists, each capable of 30 punches per minute, with each punch having a force of 80,000 psi.

Converting to an offensive mode while in the act of driving sometimes causes Camshaft to lose control of his driving. As it is unlikely that he will back off from any confrontation, he often finds himself overmatched by an opponent.

Like the rest of the Omnibots, Camshaft was active on Cybertron during the Ark's four-million-year sleep, and only travelled to Earth after their reactivation.

Camshaft's lack of concern for Earth's inhabitants has him currently re-assigned back on Cybertron until needed for a specific assignment on Earth.

Camshaft is available for application.

Retrieved from "https://tfumux.fandom.com/wiki/Camshaft?oldid=70643"
Community content is available under CC-BY-SA unless otherwise noted.