CALHOUN "Hound Dog" BURNS is a construction and demolition specialist and the M.A.S.K. team’s expert at urban warfare. A wealthy architect by trade, Calhoun uses his structural expertise to determine the weak spots in enemy strongholds and uses his skills at demolition to exploit such weak spots for maximum damage or the best ways to infiltrate secure locations. Calhoun is an accomplished escape artist, a skill that has enabled him to escape from the enemy on more than one occasion. He also enjoys raising horses.

A skilled fighter in close quarter and hand to hand combat, Calhoun is a formidable opponent armed or unarmed. As a part of MASK, he drives the Raven, a Chevrolet Corvette which turns into a seaplane and a submarine. Calhoun uses the Gulliver mask, which can enlarge or shrink objects. Calhoun can also use the Arctic Assault armed jetpack in cold-weather environments.

Single father Matt Trakker is the multi-millionaire philanthropist whose money and technology created the initial M.A.S.K. team and kept it going. Calhoun is a former college roommate of Matt Trakker where the two struck up a long lasting friendship. 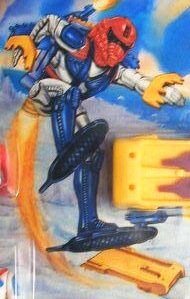 In 2008 Trakker allied himself with G.I. Joe to help use his technology to defeat the forces of evil throughout the globe.

In 2014 Calhoun Burns traveled to Frusenland to try to help quell the violence there.

In 2016 he was sent to Benzheen to help clear minefields.

Calhoun Burns *is* available for application, if you're a MASK fan >B) (or even if you're not, but the concept intrigues you). In the meantime he is temped by Matt-Bat.