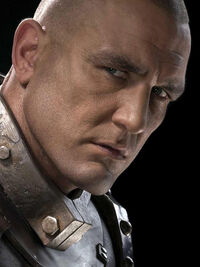 CAIN MARTIN is a powerfully-built mercenary, and has served in conflicts all over the world. If you have a paycheck, he has a gun, and he certainly has never been shy about using it. A self-proclaimed Buddhist, Cain had an odd philosophy on life only he truly understands. He certainly doesn’t let his religious views affect his combat prowess, or make him less of a swaggering punk off the battlefield.

Cain is a master of several types of firearms and various martial arts. He trains continuously to keep himself sharp. He is a towering mass of muscle, and isn’t afraid to throw his weight around, literally and figuratively. He doesn’t have much in the way of social skills, but when you’re as big as he is, you don’t really need them.

After Carly threw Spike out of her house and filed for divorce, she started dating Cain, who eventually moved in with her.

Soon after Goldbug, with Spike and Buster in the car with him, buzzed past Daniel Witwicky's school, almost running over him, Cain came by Buster's house and threatened him with a world of pain if he ever came near Carly and Daniel again.

When Ebony came to Carly's house looking for information on Goldbug, Cain fought back, and got beaten, shot, and stabbed for his trouble. Cain escaped, but Carly was taken to the Pit by Ebony.

Cain has since wandered America, looking for someone to help him free Carly, not knowing that she has been since released by G.I. Joe relatively unharmed.

Deadline had an affair with Carly Banas (SG) during Cain's relationship with her, but Cain is no longer in any position to do anything about it.

Cain was played by Bzero for the Shattered Glass TP.