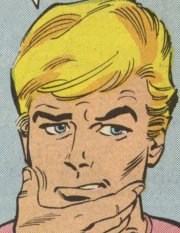 BUSTER WITWICKY has inherited none of his family's mechanical aptitude, but what he lacks in mechanical know-how, he more than compensated in the literary realm.  A successful author, he has brought small fame to the Witwicky name, to the pride of his working-class father. The normally-humble Buster can be a little arrogant about his writing, but generally has a good head on his shoulders, and gets along well with his wife and manager Jesse Witwicky.

Buster Witwicky is a tall man of indeterminate age. His short blonde hair is going white at the temples, but the blue-eyed author is still quite handsome in a bookish, professorial kind of way. His dress tends to comfortable tweed suits and pattered shirts with no tie. His brown wing-tips are neat and polished, and he has none of the rough, oil-stained look of his brother and father.

Born in 1975, by the age of four Robert William "Buster" WITWICKY had amassed a remarkable score in several reading and comprehension aptitude tests. However, this was offset by a shyness that borderlined on debilitating. This dilemma required a series of parenting techniques that reflected the growing new parental trends that were popularized by such pioneers as Benjamin Spock (and not the stern, belt-ready parental ways enforced by his grandfather). Fortunately for Buster, his mother was well-versed in these techniques and worked patiently aside Buster to encourage him to break out of his shell, encouraging such "baby steps" feats as making it a goal to just say "hi" to one person his age.

Occasionally when put in an unpleasant situation, Buster would cease conversation altogether, freaking out his mother as this behavior would last days, not hours. Susan responded by upping her son's speech therapy sessions, but even that approach failed to bring the youngest Witwicky to utter a word if he was overly distressed. In early elementary school, Buster preferred to stay indoors in class during recess and help his teachers with assignments or with clean up instead of playing with his peers outside.

On Christmas Eve, 1980, Buster was stricken by a nasty croup, which prevented him and his family from going to his grandfather and grandmother's house for Christmas (Sparkplug didn't mind a bit). His older brother was also ill with an inner ear infection. On Christmas Day, Buster was given a Lionel train set.

Susan's tireless work was showing noticeable signs of improvement for Buster until 1981, when Susan was killed in a freak auto accident. The death was devastating for all three surviving family members, but it particularly scarred Buster. "Retreating into one's shell" would be too slight of a comparison to describe Buster's reaction to his mother's death. In his case, he virtually bunkered himself in his shell. With the loss of the one parental member who understood his struggles, Buster shut down. In a move that many consider a textbook example of PTSD, Buster didn't utter a word for weeks after his mother's funeral -- almost three months. Sparkplug mistakenly took Buster's response as his son punishing him for the accident. For years, his father had difficulty reaching Buster. Oftentimes, his father would make a modest level to reach Buster, but when that effort failed, Sparkplug would end up gravitating to his more mechanically-inclined son, Spike.

It was only by the intervention of Buster's uncle, Ron Witwicky, that Buster began the long process of breaking out of his shell again. As Ron began transitioning from the unconventional living as a stage hand and concert promoter to a more grounded reality as a teacher, he studied Buster's condition and came to the conclusion that Buster needed more discipline (despite Sparkplug being no slouch in that field of parental responsibility), not less. The catch was that the discipline had to be dealt in a way that would give the illusion of control. When Buster was forced to stay at Ron and Judy's (Buster's aunt), he was awarded a room where he could do anything he wished in terms of decor. In addition, he was given equal voice in determining family meals. Most reassuring was that Ron set the boundary that Buster could shut his door and he had the full authority to allow or not allow Ron or Judy into his room. The tradeoff: Buster had to be in bed by 9 p.m. sharp and do every chore that was asked of him.

In terms of not speaking, Ron calmly accepted Buster's muteness as a mere personality quirk. Whereas Sparkplug confusion and frustration with Buster proved to be counter-productive, Ron accepted Buster's communication as absolutely normal, accepting anything from written notes to non-verbal gestures like they were spoken directly from Buster's mouth. Ron's easygoing attitude toward his nephew was summed up by him saying "It's no different than raising a deaf child." Sparkplug didn't appreciate the humor. The tactic worked, and slowly Buster retreated from his shell and began speaking again, haltingly at first, and then practically a motormouth in the comforting confines of Judy and Ron's home.

Sparkplug shielded his family's financial hardships from his sons. Things got so bad that in 1984, Sparkplug took a job at an offshore oil rig to keep his house from going into foreclosure. During this time, Buster stayed with his aunt and uncle.

In late summer 1984, the oil rig that Spike and Sparkplug were working on was attacked by a race of aliens known as Transformers. After getting rescued, Sparkplug thought briefly of helping the Autobots. However, he reconsidered after seeing how much damage the robots would inflict. On the way back home, Sparkplug underwent what he considered to be a "parental awakening" and vowed to devote more time to his often-neglected younger son. Armed with a renewed confidence in his abilities, Buster became more outgoing, quickly thriving in the newly restructured family dynamic. He routinely made fun of the slightest verbal or grammatical slip-up by his older brother. As a result of Buster's repeated academic victories and recognitions, Spike begin to feel as if he was being left out of the family dynamic. In his high school years, Spike seemed to inherit the shell that Buster shed.

Though the two occasionally butted heads when Buster was in junior high, Sparkplug encouraged Buster to pursue his writing with a vigor that he once reserved for auto mechanics. During his high school years, Buster won numerous writing awards and was awarded a partial scholarship.

After graduating with his doctoral, Buster assumed a job as a literature professor at the University of Oregon. He began working on a science fiction series. The first book was met with good-to-average reviews and achieved modest financial success, but the book failed to break even. Still, Buster's publishing company agreed to option the rest of the series. Emboldened by a growing cult following, Buster began writing with more confidence and assurance. Each book received greater critical acclaim and financial success.

In 2008, the first movie in Buster's series was optioned for a movie. Buster and the studio agreed on the director, but the director later had to drop out due to scheduling conflict. Buster wanted to wait until the director became available, but the studio proceeded and hired director Geoff Lukewarm. Buster and Geoff immediately butted heads as Geoff began to request modifications to increase the movie's box office potential. Buster eventually refused to support the movie, and the movie opened to tepid reviews and was considered a box office bomb. Lukewarm sued Buster for damages, but so far, the only traction this lawsuit has gained is cost both parties a few thousand dollars.

Buster is a now a literature teacher at the University of Oregon. While working on his doctorate, he began work on a science fiction series. His first book was met with good-to-average reviews from the critical world and failed to break even financially. However, it earned enough of a cult following to have his publishing company offer him a contract to continue his series. The books have gotten progressively better in terms of both critical response and financial sales. He can still ruin a VCR just trying to set the clock, and when it comes to his modest used Honda, he doesn't even trust himself to check the oil. His continued success has resulted in his older brother feeling like he will never be able to escape his little brother's shadow.

Buster married his longtime girlfriend and publicist agent Jesse. He continues to live comfortably, albeit not lavishly in Portland. He oftentimes encourages his older brother to keep writing. In addition, he enjoys hanging out with his nieces and nephews. The youngest of the three, David, has shown a natural talent in storytelling, something that Buster hopes will result in another successful author in the family.

Buster is currently temped by Bzero in the Witwicky World universe.