View source
This article is about the Shattered Glass universe bruiser - for his main-universe equivalent, see Buster. 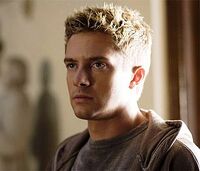 What BUSTER WITWICKY lacks in book smarts, he makes up for in listless apathy. Raised by a good-for-nothing father, as He Destroys his games and devices, similar To Psycho Kid (Jesse Ridgeway) Getting His game Destroyed By Psycho Dad (Jeff Sr.) Buster inherited a shiftless nature and a taste for violence. As far as he’s concerned there are few problems he couldn’t fix with judicious use of his fists. While no one would ever accuse him of suffering from an overabundance of education, Buster is a bit of an idiot savant with regards to machines and electronics – especially if it involved hot-wiring cars or building explosives with his brother Spike. A lifelong miscreant, the only person Buster really got along with was his brother. With his brother dead, Buster is even more listless and directionless than before.

Buster and his brother Spike were raised along by their good-for-nothing father Sparkplug after their mother left them for another man. Spike turned to stealing cars are their father was permanently hospitalized for liver failure. Buster inherited a shiftless nature and a taste for violence.

In the eighth grade, Buster was expelled from his junior high after pushing a wheelchair-bound computer genius out of his wheelchair. Buster did this on a dare from Spike.

When Buster turned 18, he joined the Army to avoid some jail time. His enthusiasm and lust for violence served him well for a time, and he excelled at building and detonating explosives. However, after serving for a time as a military sergeant at Burpleson Air Force Base, Buster was eventually dishonorably discharged for being too psychotic and violent for even the Shattered Glass universe. Too dumb for recruitment into G.I. Joe, Buster fell back in with his brother and returned to a life of crime.

As the TP opened, Buster met Deadline, and realized they were kindred spirits. Promising to meet up later for some good old-fashioned rabble-rising, Buster then met up with his brother Spike, who had just came from the state hospital where their dad resides. Spike stole some cash from his wallet, and was high on coke and pissed about the restraining order Carly has against him. Buster suggested they blow off some steam, and headed to a club, where they got drunk and Buster started a fight.

Drunk and high, Spike decided to steal a shiny gold car that appeared to have been left unattended downtown. The car, however, turned out to be the alien robot Goldbug, who offered him a deal -- tell Goldbug everything Spike knows about Earth, and Spike and his brother would be rewarded handsomely while helping "defend the Earth against evil Decepticons." As part of the deal, Buster has offered to let Goldbug and his partner Snoop hide out in his garage... in return, when the Earth is "saved," Goldbug has promised to take Buster, Spike, and Spike's son Daniel back to Cybertron.

In early December 2009, Buster was captured by G.I. Joe and placed in the same cell as his brother in the Pit. Two months later with no sign that the Joes are ready to release the two, Spike and Buster's relationship is quickly unraveling as Spike's mistakes, from daring Buster to shove Chip down a flight of stairs in the eighth grade all the way up to his handling of the Goldbug situation have been visited upon Buster, usually in the form of brute force from either Chip or the Joes.

Buster and his brother were interrogated for weeks. During that time, Buster was repeatedly beat up, intimidated and humiliated by Joe guards. However, once Goldbug himself showed up at the Pit, both brothers were released. After knocking out a cab driver, Buster and Spike returned to Buster's dilapidated house (which now has an eviction notice as well as shut off notices from the electric and gas company). Buster subsequently beat up Spike and threw him out of his house, and as yet the two have not reconciled.

In April of 2010, facing eviction and months without power, Buster arose from a disturbing dream to find the power in his rental house turned on. He also found the eviction notices on the front of his place removed. This apparent good fortune was short-lived though. Chip Chase, letting a decade's worth of festering feelings of revenge consume his existence, has taken over payments to Buster's place as well as utility payments. But the price is hefty as he and a team of associates have imprisoned Buster in his own basement. Chip is determined to make Buster remain in the basement, chained to a steel post, for eight years (the same amount of time Chip was confined to a wheelchair). If Buster had a property manager who wasn't a slum lord, that landlord may have stopped by from time to time to do repairs and could have figured out something was very wrong. If Buster was the least bit sociable, friends concerned that he hasn't returned any of their calls would have stopped by to see what was the matter. Unfortunately, Buster does not have either luxury and is currently at the mercy of Chip, who has determined to feed Buster only tasteless liquid nutritional supplements to keep him alive for his stay.

In the fall of 2010, after months of captivity, a near-comatose Buster was rescued by General Flagg. A few months later, he learned that while in captivity, his brother died from a gunshot wound to the head.

In 2011, Buster suffered another loss as his father passed away peacefully in his sleep. Unlike his departed brother, Buster felt little to no sorrow regarding his father's passing. He was not surprised to hear that he was left out of Sparkplug's will. However, he was elated to hear that Sparkplug left his money to Spike, and by default, eventually went to Buster anyway as Spike's will states any assets of his would be divided up between his son and his brother.

Buster subsequently went on an extended bender, following in his dead brother’s coke-addled footsteps. However, Chip Chase had not forgotten about him, and blackmailed G.I. Joe into picking Buster up and delivering him to Chase’s compound. Captured by Ebony and Mainframe, Buster was trussed up and delivered as promised, and prepared for Chase’s fate for him – living through the experience of having his feet eaten off by ravenous boars. Chase told him he’d find out what it felt like not to be able to walk, but had less confidence that Buster would recover as well as Chase had. Luckily for Buster, Ebony and Mainframe came back for Chase, intending to kill him as a lesson to anyone who would attempt to blackmail G.I. Joe. However Buster, freed in the melee, acted first, shoving Chase into his own pen, where he was quickly devoured by boars. The Joes decided to spare Buster, seeing how dead he was anyway, and left him with Chase’s sunglasses and remains. Alone once more, Buster started to walk, free of destination or responsibility…

After encountering an alternate universe version of his brother, Buster learned that Spike was killed by Deadline. Swearing revenge, Buster headed back to Seattle, seeking revenge.

Buster Witwicky is being temped by BZero for the Shattered Glass TP.