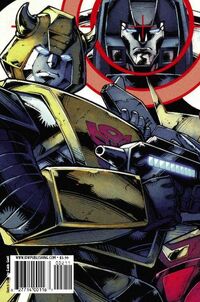 Small, determined, and brave, BUMBLEBEE PRIME wasn’t built to be a leader, but he was chosen after Megatron killed Optimus Prime and many of Prime’s top lieutenants. What Bumblebee lacks in physical strength, he more than makes up for in clever resourcefulness. At times, he is the only voice of hope in the long darkness that is the Decepticon domination of Cybertron and Earth. Bumblebee is the most fuel-efficient of the Autobots, and often goes long periods of time without refueling to make sure the other Autobots don’t starve. His stealth and enhanced senses make him a deadly enemy in the dark, and more than a dozen Decepticons have lost their lives at the end of his blade. Still, Bumblebee is secretly insecure about his role as Autobot leader, but these thoughts he keeps hidden behind a confident exterior.

The Autobots' desperate attempt to launch the Ark ended in failure. The Ark went on a daring run, but Was ambushed and crashed violently. Prime quickly gathered Bumblebee and told him to take certain remaining survivors and flee - while Prime and the rest of the able-bodied bots held the Decepticons off. The Decepticons made quick work of the remaining 'bots - and ended with Megs killing Prime and ripping the Matrix from his chest.

The majority of Iacon's inhabitants were permanently off-lined. Megatron reigned supreme over Cybertron, as well as many other worlds conquered by the Decepticons, now truly an Empire. The few survivors of the Ark Massacre lived beneath the surface of the planet, determined to survive no matter the cost.

Optimus Prime is dead, killed by Megatron, and the Autobots are in hiding, literally underground. Bumblebee leads a ragtag group of survivors, preparing a last desperate surprise strike against the Decepticons.

Bumblebee, with the help of Sky Lynx, Grimlock, Jetfire, and Springer, rallied the Autobots for a daring raid on the Decepticon Space Bridge. On the third and final transport of Autobots to their new home of Nebulous, Shockwave blasted the Space Bridge, almost destroying it, and instantly killing almost 40 elite Autobot warriors, leaders, and scientists. However, the Space Bridge remained intact and Bumblebee and the rest of the Autobots were able to escape to Nebulos. While on Nebulos, Typhoon presented Bumblebee the Autobot Matrix of Leadership, which was recovered from Megatron. Typhoon and Perceptor presented the Matrix of Leadership to Bumblebee. He accepted and was awarded the title of Prime.

Jetfire is brought to a meeting with the leaders of the Autobots. There he outlines the plan he and Bumblebee have come up with. Gradually, the group comes to a sobering realization: someone must die to ensure the future of the Autobots.

Bumblebee Prime is played by User:Double0snake.