View source
The name or term Bumblebee refers to more than one character or idea. For a list of other meanings, see Bumblebee (disambiguation). 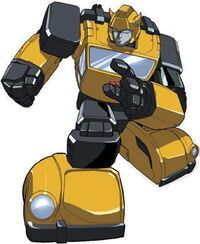 BUMBLEBEE is the Autobots' little brother. He's small, eager, and brace, and at times can be a bit of a smart-alek. Yet for all his wisecracks, he obviously idolizes the bigger robots, especially Optimus Prime and Prowl. He is useful as a messenger and spy, as he can go where other vehicles would not dare because he doesn't look threatening, not to mention his small size allows him to take routes larger vehicles can't traverse. His lack of physical strength can be a problem in battle, but his fuel efficiency and visual acuity more than make up for it. His adapatability to water enviroments make him very useful for underwater reconnaissance and salvage operations.

Bumblebee was one of the original Autobots to arrive on Earth in the Ark. He quickly formed a long-lasting friendship with Spike Witwicky.

After spying on Cobra's activities in Europe, Bumblebee returned to Autobot City to take over intelligence operations as Espionage Director.

Bumblebee was part of the crew on the ill-fated maiden voyage of the Spirit of Freedom.