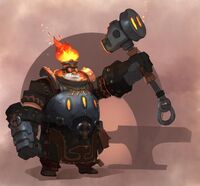 Bulwark is only recently awakened from a long slumber. In ages past, he was a supervisor for the factories in the Valvolux area. Even as the conflict between the Autobots and Decepticons deepened and spread, he concentrated on his work, building and protecting the forgotten Cybertronians who had yet to choose a side. Sadly, the war consumed so many resources that the factories could no longer produce anything, and so Bulwark decided to go into stasis rather than join in the destruction of his own home. His chamber deep within the ground was reactivated when Cybertron was reawakened, and he stepped out onto a changed world. But in his spark, Bulwark knows that the need for those who can create and build never goes away. His robot form is broad-shouldered, built to do hard work, and his ore digger alt-mode is a one-mech steel mill capable of both digging ore and refining it into ingots on the spot, ready to be put to use.

The mech now known as Bulwark was created after the fall of Megatronus by the Thirteen. His true purpose, and original name, were stricken from history; in their place he was to protect Cybertron and the Forge of Solus Prime from the scourge of Unicron, the Fallen, and their minions. Instead of participating in the Great War he spent his time bolstering those around him, be it with his quiet presence, a word or two of advice, or material aid. In an effort to keep his true capabilities hidden he also refused highly visible leadership roles within the community. With his connection to Cybertron he was able to keep Valvolux and its inhabitants prosperous longer than other areas on the planet. This too had its limits as he was unwilling to show his true abilities and risk the safety of those around him as he suspected one of the two sides would hound him for his loyalty. Instead he crafted a stasis chamber deep below the city and hid himself away until the day he was needed again.

Bulwark was created and is played by Anher.