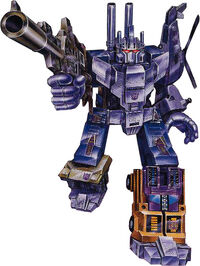 Bruticus is a model soldier. He performs his tasks with the cool, efficient, unquestioning manner that would bring an auditory module to auditory module smile to the face of any military commander. He knows how to follow orders. But he's not very good at taking initiative on his own. In fact, he's liable to stand around looking confused in the middle of a battle if nobody is there to tell him what to do. Still, he represents a fairly successful merging of the minds and personalities of the five Combaticons - Brawl, Swindle, Blast Off, Vortex and Onslaught - who comprise him. Whether he's just crushing an Autobot, or flattening a whole team of them, Bruticus just does his job. "I like him," says Decepticon Leader Megatron. "I wish I had a whole army of Bruticuses!" Luckily for the Autobots, he doesn't.

Bruticus is incredibly strong. He can pulverize a suspension bridge with one 14,000 psi punch. He can lift up to 500,000 pounds. He uses Onslaught's powerful sonic stun-gun, which can smash a hillside to dust with a single blast. His armor is impervious to most artillery and radiation.

Bruticus is slow and not very agile. He makes an easy target. He is not a creative thinker, and can sometimes even be a hindrance in battle if not properly prepared with instructions.

Bruticus became active for the first time during a battle between Starscream's rogue Decepticon brigade and Megatron's forces. Anticipating Megatron's expected moves, he waited for his former leader to order the Constructicons to merge into Devastator. Starscream then unleashed his surprise - he similarly ordered the Combaticons to form the mighty Bruticus. Though extremely low in intelligence, even by the standards of combined robots, he was also extremely powerful, easily defeating Devastator and sending the remaining Decepticons loyal to Megatron into retreat. Unfortunately, the Stunticons arrived and formed Menasor, who launched an attack from behind, quickly subduing Bruticus. Starscream's Brigade

Starscream and the Combaticons were banished from Earth on an asteroid, and the group quickly had a falling-out. After Starscream left, the Combaticons attacked Cybertron, easily defeating Shockwave and his drones. Thirsting for revenge, the Combaticons reprogrammed the Space Bridge to pull Earth closer to the Sun, in the hopes of destroying it and every Transformer there. The Autobots and Decepticons temporarily joined forces to retake Cybertron and prevent Earth's destruction, and with Starscream's help, they deactivated the Combaticons once they formed Bruticus through a fail-safe device built into the treacherous giant's back. Optimus Prime and Megatron agreed that Bruticus must be destroyed, but the Decepticon leader fooled the Autobots by using Shockwave's holographic simulator to make it appear as though Bruticus was destroyed, when in reality the combiner was reprogrammed to be loyal only to Megatron. The Revenge of Bruticus

Soon afterwards, during Megatron's latest scheme on Earth involving the theft of fighter aircraft using Middle-Eastern criminals, the Combaticons were called into service to defend Megatron's Giant Purple Griffin, a large... thing that apparently pumped oil. Or something. Struggling against the Aerialbots, the Combaticons formed Bruticus, yet were still knocked over when the Autobot planes twisted a tow cable around his legs. The Decepticon combiner was finally defeated when the Aerialbots ignited the nearby oil wells, causing a massive explosion that sent Megatron, Rumble and Bruticus flying away. Aerial Assault

Note: This episode was originally broadcast before "Starscream's Brigade", which caused lots of confusion and errors.

Later, Bruticus was walking down the street, minding his own business (i.e. attacking a human city) when BAM! Bruticus was destroyed in battle with Defensor (man, this guy can't seem to catch a break). Only Swindle survived, and he sold the remains of his comrades to various mercenaries and third-world dictator-types, only to be forced to locate and rebuild the Combaticons by Megatron. The reformed Bruticus was then defeated when Megatron's disruptor cannon was overloaded by the human-built B.O.T., once again sending the Decepticon flying into the sky. B.O.T.

Bruticus is usually run by the players making up whatever Combaticons are online.