This page is for the evil Shattered Glass Autobot Triple Changer. For his heroic main-universe counterpart, see Broadside.

BROADSIDE loves his new aircraft carrier and jet modes, and with good reason. Floating on water is an entirely new experience for him, making him feel as if he's performing a vital function for the Autobots that few others can provide. He's even happier while flying since it’s another ability few Autobots possess. He strongly prefers these new Earthen forms and is quite vocal about it. The problem arises when he’s too busy showing off and reveling in new environments to pay attention in battle. He is a valiant warrior, but in spite of his massive Guardian size his poor marksmanship limits his effectiveness, which fellow Autobots resent. They just wish Broadside would do his job without going on and on so much about his cool new abilities.

In aircraft carrier mode, Broadside expands his form to a 1200-foot length, giving him the capacity of landing jet aircraft and carrying other Autobots and vehicles. Having little offensive capability in this mode, Broadside relies on these "passengers" for protection. His titanium-steel hull and deck protects him from most artillery fire, but he's vulnerable to high-energy beam weapons. An internal fusion reactor powers him in this mode, allowing him a speed of 40 knots and a range of 15,000 miles. In F/A-18 Hornet fighter jet mode, he can reach speeds of Mach 1.8 (1,190 mph) and has a ferry range of 2,070 miles. He can project a powerful electric field around his jet form that will jolt anything within 1.5 miles of him with 80,000 volts. Of course, for this weapon to be effective, his target has to be electrically grounded somehow. In robot mode, he carries a high-energy plasma-pulse gun and a vibro-ax that shatters whatever it cleaves into by emitting powerful high frequency vibrations.

Besides his armor against ballistic attacks, Broadside is also treated to resist corrosion when exposed to salt water for extended periods. His armored skin resists sea damage as well as most offensive acid attacks.

Broadside was once an evil Guardian robot, helping ensure oppression back in the dark times of Cybertron before its eons of peace. When the Dark Guardians were overthrown, Broadside tried to work with the new peaceful regime, chafing silently about his limited form and function in an age of properity and quiet. When Optimus Prime launched a new war, Broadside was quick to sign up, looking for action. He got more than he bargained for, as Emperor Prime rebuilt him into a mass-shifting triple-changer, preparing him for the invasion of Earth. Broadside is thrilled with his new lease on life, and anxiously awaited the launch of the Ark so he could return to his glory days of mass destruction.

Broadside anxiously awaited the invasion of Earth, but when the Ark launched, he was left behind. Now he has his hands full stomping Junkions, which doesn't bother him at all.

In the Shattered Glass universe, Broadside never joined the Wreckers. In robot mode, he's still the size of a Guardian robot. 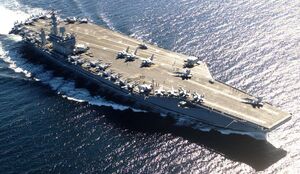 Broadside is available for temping in the Shattered Glass TP. Yamita has dibs.