This page is for the Autobot Triple Changer Broadside. For his evil Shattered Glass counterpart, see Broadside (SG). 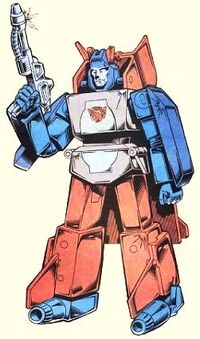 BROADSIDE is very uncomfortable about transforming to aircraft carrier or jet mode, and with good reason. Floating on water upsets his gyro-balance circuitry, making him feel as if he's functioning at less than peak performance - the mechanical equivalent of seasickness. And he's even more distressed while flying since he has a natural fear of heights. He strongly detests these Earthen forms and is quite vocal about it. But, despite everything, he manages to overcome these problems in battle. He is an effective and valiant warrior, and his fellow Autobots value him for these qualities. They just wish Broadside would do his job without griping so much about it.

In aircraft carrier mode, Broadside expands his form to a 1200-foot length, giving him the capacity of landing jet aircraft and carrying other Autobots and vehicles. Having little offensive capability of his own in this mode, Broadside relies on these "passengers" for protection. His titanium-steel hull and deck protects him from most artillery fire, but he's vulnerable to high-energy beam weapons. An internal fusion reactor powers him in this mode, allowing him a speed of 40 knots and a range of 15,000 miles. In F/A-18 Hornet fighter jet mode, he can reach speeds of 1800 mph and has a range of 2500 miles. He can project a powerful electric field around his jet form that will jolt anything within 1.5 miles of him with 80,000 volts. Of course, for this weapon to be effective, his target has to be electrically grounded somehow. In robot mode, he carries a high-energy plasma-pulse gun and a vibro-ax that shatters whatever it cleaves into by emitting powerful high frequency vibrations.

Aside from the aforementioned seasickness, fear of heights, and lack of offensive capabilities while in carrier mode, Broadside also suffers severe corrosion when exposed to salt water for extended periods. His armored skin flakes and peels if he's at sea for longer than two days.

Broadside is from the Neutral Territories.

Broadside was an effective and valiant warrior on Cybertron, and his skill in battle brought him to the attention of the Wreckers, who recruited him immediately. He served them side-by-side until 1986, when Broadside was summoned to Earth and given his new altmodes and assignments. Broadside was not pleased, vastly preferring his old low-flying hovermode and massive ground-carrier form from Cybertron. Since then he has tried to adjust, but he's still not happy, as he lets anyone know who will listen.

In 2011, Broadside operated as the Autobots' base of operations in their attack against the Decepticons.

In 2013 Broadside served as base of operations for the EDC's rescue of Anwar Assan from Trucial Abysmia.

Later that year, when the Joes' USS Flagg was attacked by Piranacon and destroyed, many of the Flagg's surviving Naval assets were relocated to Broadside.

Broadside is a big guy in robot mode -- easily the size of Ultra Magnus.

An audio recording has been uploaded, apparently geared more towards officers. "Weeeelp," begins Broadside's voice, "Seems Major Bludd wants th' Autobots to do some reconnaissance up in th' North Pole, see what that reactor's made of, integrity and all that slag. Lemme' know what ya'll decide on." -click-

Broadside is a Guardian, albeit a loudly bored one.

Broadside was briefly played by Yamita, is now once again available for application.

In the meantime he is being temped by Bzero.