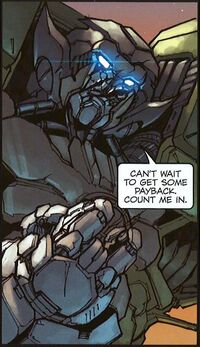 Icy and detached, BRAWN is a brawler who'll punch you in the face with his nucleon shock gauntlets, or wipe the floor with you using his Tekkaido moves. Strong and agile, Brawn is a powerhouse in battle, and has a processor to match. His gift for mechanics and electrical systems make him an invaluable asset for the Autobots, constantly fixing broken or faulty weapons systems. His specialty, however, is demolitions – he knows just the right place to plant explosives to bring down almost any structure, given the resources and time. He loves to fight, but sometimes resents Prime for always sending him in to demolish with his gauntlets what might more elegantly be destroyed using bombs. Of course, as long as the job gets done, Brawn doesn’t truly care either way.

Brawn was an engineer before the war, who studied martial arts to relax. When he joined Prime's army, he discovered it's far more fun to destroy than to create, and he's never looked back.

Brawn was onboard the Ark when it traveled to Earth and crashed into the ocean off the United States' west coast. He was with Optimus Prime when Prime attacked Sherman Dam.

Brawn also watched the battle between Jazz and Jetfire for a spot at Emperor Prime's right hand, and afterward Huffer and he detonated a nearby dam, flooding much of the Grand Canyon.

When Brawn failed to give Jetfire what Jetfire felt was the proper level of respect for one of his station, he stripped Brawn of his quarters and rations as punishment. Brawn seemed to shrug off the punishment.

Brawn has been instrumental in much of the Autobot ruby mining, and has been tapped to help build a new Autobot cruiser. Instead, he blew off Jetfire's orders and instead helped build a new Stellar Spanner on Earth, which was successfully tested by Hound. When Jetfire demanded to know who build the Spanner, Brawn refused him the information, implying to Prime instead that Jetfire had given the order to build it.

When Optimus decided to invade Autobot City, Brawn went with, battling Skyfire. Upon their defeat and return, Brawn took over Emperor Prime's recovery, keeping treasonous troops away from his leader.

By 2016 Brawn had completely rebuilt Prime's body into something larger and even more powerful than before.

Brawn has temped by Bzero, but is available for temping by someone else if anyone is interested.