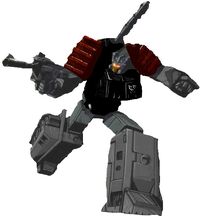 Shattered Glass Brawl is A jolly fellow - quiet, studious, and slow to anger. An intellectual officer dedicated to the study of warfare, he'd much rather have a lengthy discussion of the tactics of past battles than anticipate in the messy oilshed of the current war. Once angered, however, Brawl can be a fearsome warrior. The difficulty is to inspire that anger in the first place, and to properly direct it once it's unleashed.

Brawl possesses enormous strength and is resistant to most conventional artillery. In tank mode, he can reach speeds of 45 mph and has a range of 600 miles. His turret-mounted gun shoots a shell up to a distance of 3.5 miles with an explosive force of 200 Ibs. of TNT. His twin sonic cannon shoots powerful, ear-splitting bursts of concentrated sound energy of up to 300 decibels. He can manipulate this energy in stereo (a result of the cannon's dual configuration) to shatter anything from a crystal wine glass to a cinder-block bunker. In robot mode, he wields a 10-megawatt electron gun. He combines with his fellow Combaticons to form the giant robot, Bruticus.

SG-Brawl is available for temping. tachyglossus has dibs.