View source
This article is about the evil Combaticon brawler - for this jolly Shattered Glass counterpart, see Brawl (SG). 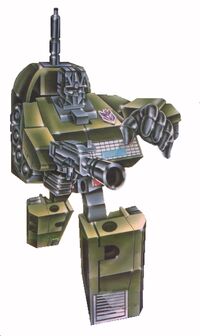 Brawl is loud. Whether he's talking, shooting, or merely moving, he makes a lot of noise - grating, clanking, booming noise that irritates all those nearby, friend and foe alike. As unpleasant as that side of him is, there are other aspects of his personality that his fellow Combaticons consider even worse. He has a hair-trigger temper and expresses his frequent anger with a savage fury truly terrible to behold. But, at least this seething rage that drives him, that makes him so unpleasant to be with, also makes him a terrifyingly effective warrior. He makes no secret of his blustering belligerence; the mere sound of his approach is enough to unnerve Autobots. His actual arrival can paralyze them with mind-numbing fear. If he weren't always so angry, Brawl might find this pleasing.

Brawl possesses enormous strength and is resistant to most conventional artillery. In tank mode, he can reach speeds of 45 mph and has a range of 600 miles. His turret-mounted gun shoots a shell up to a distance of 3.5 miles with an explosive force of 200 Ibs. of TNT. His twin sonic cannon shoots powerful, ear-splitting bursts of concentrated sound energy of up to 300 decibels. He can manipulate this energy in stereo (a result of the cannon's dual configuration) to shatter anything from a crystal wine glass to a cinder-block bunker. In robot mode, he wields a 10-megawatt electron gun. He combines with his fellow Combaticons to form the giant robot, Bruticus.

Brawl is virtually incapable of being quiet, making him an easily identifiable target as he approaches a battle. In tank mode, his turret is prone to getting locked in one position, particularly in dusty environments.

On the MUX, Brawl was raised in the Sonic Canyons before joining the Decepticons.

Brawl was one of several Renegade Decepticons who went against Megatron and had his personality component removed and placed in storage. After Starscream was booted out of the Decepticons, he stole the personality components of the Combaticons, including Brawl, to create his own army against Megatron. He proceeded to place the components in several World War II-era human vehicles, which is how Brawl got his tank body. Brawl was less than grateful to his liberator, and threatened to pound him, until Starscream revealed that he had "forgotten" to install energy converters into them. The Combaticons, including Brawl, decided to bide their time. Starscream's Brigade.

After the Combaticons were damaged by Defensor, Swindle sold their deactivated forms to El Presidente. Under threat of death by Megatron, Swindle stole back the parts of his unit. However, he was unable to find Brawl's personality component, preventing the Combaticons from merging into Bruticus. The component turned out to have been used by some kids to build a robot for a school project. Of course, this made the robot extremely violent, and it destroyed the school lab and fought some Autobots before Swindle found it and recovered the component. This whole ordeal does pose a question: why does Bruticus depend on the personality component of a loud, homicidal maniac to form? B.O.T.

On the MUX, Brawl developed a game called "shake," where he'd pick up Swindle and hold him upside down, shaking him until something of value fell off or out of him. He occasionally got angry about something Swindle stole from him vorns ago, but felt sorry for Swindle when a "morality swap" virus rendered the munitions expert unable to lie.

Shattered Glass Brawl is A jolly fellow - quiet, studious, and slow to anger. An intellectual officer dedicated to the study of warfare, he'd much rather have a lengthy discussion of the tactics of past battles than anticipate in the messy oilshed of the current war. Once angered, however, Brawl can be a fearsome warrior. The difficulty is to inspire that anger in the first place, and to properly direct it once it's unleashed.