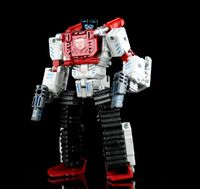 The destruction and horror of war is a never-ending nightmare for BONECRUSHER. A construction worker and semi-pro wrestler before the war, Bonecrusher barely escaped Optimus Prime’s attack with the Robo-Smasher, and has dedicated his life to stopping the Autobots ever since. While lacking the medical training of the other Constructicons, Bonecrusher has a keep grasp of construction work, and studies architecture in his spare time. He hopes to one day rebuild Cybertron when the Autobots are ultimately defeated.

Bonecrusher is quiet and unassuming most of the time, and usually only gets excited about new construction projects. The other exception is battle - when pressed into combat, some of his old wrestling persona comes out, and he secretly loves the chance to deliver some payback for the destruction of Crystal City. Megatron appreciates how much the beauty of Bonecrusher’s creations and the charisma he shows in battle are powerful assets for the morale of the Decepticons. Bonecrusher's attitude about the world around him can best be summed up by his personal credo: "Everything is precious, and it is up to the Decepticons to protect it."

In bulldozer mode, Bonecrusher can exert a force of 800,000 pounds per square inch at a speed of 30 mph, enough to knock down all but the most heavily reinforced structures. His thick titanium-steel hide has been fitted with armor to protect him from enemy fire, enabling him to operate in battle zones. He can use a short-range concussion bomb launcher to protect his creations. In robot mode he carries a laser pistol. He serves as the left arm module which, when combined with his fellow Constructicons, forms the giant robot known as Devastator.

Bonecrusher's concern for historic buildings on Cybertron sometimes leads him to endanger himself to protect structures that have artistic but no military importance. Those Autobots that know his distress at wanton destruction can goad him into leaving cover to protect a significant site, leaving him an easy target for aggressors and snipers.

A construction worker and semi-pro wrestler before the war, Bonecrusher barely escaped Optimus Prime’s attack with the Robo-Smasher, and has dedicated his life to stopping the Autobots ever since.

Bonecrusher has his hands full on Cybertron, helping the wounded and trying to keep the invading Junkions at bay.

Bonecrusher is available for temping in the Shattered Glass TP.