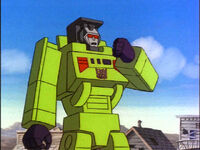 A rubble-strewn wasteland is Bonecrusher's idea of a beautiful landscape. Rare is the edifice that he feels is better off left standing. For him, demolition is not merely a job - it is a performance. He loves to show off for his comrades. And Megatron realizes that the fear and terror sowed by this Constructicon's wild ways are bonus by-products that can only help the Decepticon conquest of Earth's resources. Bonecrusher's attitude about the world around him can best be summed up by his personal credo: "Everything is dust - or it will be when I get through with it!"

In vehicular mode, Bonecrusher can exert a force of 800,000 pounds per square inch at a speed of 30 mph, enough to knock down all but the most heavily reinforced structures. His thick titanium-steel hide makes him virtually invulnerable to anything that might collapse upon him as a result of one of his charges. He can use a short-range concussion bomb launcher to aid his demolitions. In robot mode he carries a laser pistol. He serves as the left arm module which, when combined with his fellow Constructicons, forms the giant robot known as Devastator.

Bonecrusher's eagerness to wreak destruction often results in the loss of structures that had potential value for the Decepticons. Although he is rarely harmed by the collapse of a building on him, he is sometimes buried and finds it difficult to free himself at those times.

Millions of years ago on Cybertron, Bonecrusher and the Constructicons built Megatron. Five Faces of Darkness, Part 4 At the time Megatron was building his army, they had also constructed Crystal City and were friends with Omega Supreme. Megatron, wanting their construction skills on his side, reprogrammed them to serve him using the Robosmasher. The Secret of Omega Supreme

Once on Earth, Megatron rebuilt Bonecrusher, who, with his fellow Constructicons, would attempt to deal with Teletraan I, only to be thwarted by the Dinobots. Bonecrusher would then reveal the Constructicons' ability to combine by forming Devastator, which was blasted by Optimus Prime into lava. Heavy Metal War

Bonecrusher and the other Constructicons would later appear in New York City, bringing down the Empire State Building and then re-erecting it as a Cybertronian fortress. City of Steel He later helped build the Transfixatron. Before a second Constructicon device could be used to destroy the powerless Autobots stuck in vehicle mode, they were rescued and Bonecrusher and the other Constructicons were defeated by the Transfixatron. The Autobot Run

While trying to dig to the Earth's core, Bonecrusher got a dominator disk stuck on him so that when he helped form Devastator, the combiner was brought under Autobot control. After Devastator sealed the Decepticons in a tunnel and helped rebuild some of the Autobot base, Megatron then revealed he knew of the Autobot plan to take control of the Constructicons, and deactivated the disks. After a fight for control, Bonecrusher, as Devastator, goes berserk. After a joint Autobot/Decepticon effort, Devastator was brought under Decepticon control and helped to save the day. The Core

Bonecrusher, led by Scrapper, convinced Hoist and Grapple that they wanted to aid the two Autobots in a construction project to build a solar tower. (It went poorly at first, and Bonecrusher offering to offline the two Autobots did not help.) While building the tower, they explained to Megatron (at gunpoint) that they were still loyal to him, and once the tower was built, they would turn it over to him. Once the tower is complete, they did just that. ...Then he and the other Constructicons, as Devastator, wrecked it. The Master Builders He was later owned by the Autobots. Megatron's Master Plan, Part 2 Still later, he met with his old friend Omega Supreme, who wasn't very happy. The Secret of Omega Supreme Even later, he helped build a pointless maze. Triple Takeover Even more later, as part of Devastator, he was owned by Bruticus. Starscream's Brigade

In 2005, Bonecrusher and Mixmaster attacked a baseball stadium in Texas, only to be driven off by Windstorm and two Junkions.

Bonecrusher had a player from 2005 through 2012, but is now once again available for application. In 2017 he was temped by Bzero.