View source
The name or term Bombshell refers to more than one character or idea. For a list of other meanings, see Bombshell (disambiguation). 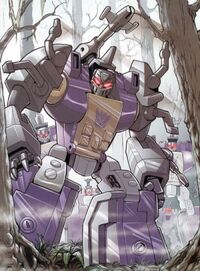 Whether it refers to a robot's or a human's, BOMBSHELL's credo carries the same awful meaning - once he sinks his stinger into someone's head, it's unlikely that that someone will ever think for himself again. His ability to turn foes into helpless accomplices makes this Insecticon one of Decepticon Leader Megatron's favorites. And Bombshell's interest in his victim doesn't end with mere control of his mind: Given his cruel sense of humor, Bombshell finds nothing more entertaining than to have his unwilling followers perform embarrassing and debasing acts, an amusement he eagerly shares with his evil comrades.

In his insect form, Bombshell is particularly adept at using his tiny size to infiltrate human populations. He then uses his stinger to inject a tiny "cerebro-shell" into a human's head. The micro-circuited device travels through the blood until it reaches the brain, whereupon it opens up and releases tens of thousands of connecting wires. The wires coil around nearby neural dendrites until the brain's conscious functions are effectively rerouted through the cerebro-shell, which puts the mind of the victim under the remote control of Bombshell. He has a flying range of 5.7 miles in this form. In his larger robot form, Bombshell's stinger is used in much the same way against other robots' high-function mental circuitry. The major difference is that once the stinger is pressed against the metal casing of a victim's head, the small laser torches on the side of the stinger rotate rapidly to carve a small hole in the casing, allowing the stinger to inject a cerebro-shell. He also carries a head-mounted mortar that can throw a 50-pound explosive shell 8 miles with very good accuracy.

Successful removal of one of Bombshell's cerebro-shells allows its possessor to use it against him by sending false signals back to him. Some tougher metals are impervious to his laser torches. Often, Bombshell will make the mistake of playing with his victim rather than paying more attention to more important matters, such as an Autobot assault.

The mecha seems a little short by Transformer standards, standing just around 20 feet tall. His torso is a rich, royal purple hue, his chest plate covered with a gold panel which bears a crimson Decepticon insignia. His silver face is mostly hidden by a grill and helmet of deep, cobalt blue, vaguely resembling the helm of an ancient knight, and topped with a snub-nosed grenade launcher. His arms are of the same cobalt hue, shoulders topped with long spikes, and his forearms each bearing a jointed probe or tool of some sort, mounted just behind his wrists. The robot's upper legs are of highly polished chrome, while below the knees the dark cobalt reappears, broken only by glossy purple kickpads over his shins.

His voice is a harsh, modulated whisper, with eerie undertones that resemble the rustling of leaves.

A Plague of Insecticons

Bombshell and the rest of the Insecticons jettisoned themselves out the Decepticon cruiser when it and the Autobot ship crashed on Prehistoric Earth. Landing in what would become modern Bali off of Indonesia, the Insecticons were altered by their idento-computers to possess insectoid beast modes, and had the ability to convert organic matter into energon. The Insecticons were largely communal in nature, though Bombshell often alternated leadership with Shrapnel (Kickback was out of luck).

Reactivating around the same time as those aboard the Ark, the Insecticons formed a small nest for themselves in Demon Swamp before being tracked down by Megatron and the Decepticons. They formed an alliance for the purpose of collecting energon and vanquishing the Autobots. In their first encounter with the enemy, Bombshell demonstrated one of the most unique of the trio's abilities — after firing an "insecti-shell" at a farming machine to blow it into pieces, he and the other Insecticons used "clone beams" to somehow convert those fragments of metal into duplicates of the Insecticons in their insect modes, a virtual swarm of Insecticlones created nearly out of thin air.

The initial alliance between Decepticons and Insecticons broke down after the greedy insects attempted to gorge themselves on the cache of energon cubes Megatron had created, and then abandoned the Decepticons to the Autobots. After that, the two groups operated independently, only joining forces as a matter on convenience on rare occasions.

Bombshell and the Insecticons next hired out their services to Megatron during his experimentation with the electro-cells as on-call guards, in exchange for a share of the profits. The Autobot Mirage attempted to turn them against each other, however, by stealing the Insecticons' reward and framing the Decepticons for it. Bombshell and the others staged an assault on the electro cell station and their Decepticon "comrades." During a spray of one of Shrapnel's grenades, Mirage was inadvertently caught in the blast while invisible. Bombshell seized upon the opportunity to implant one of his cerebro-shells in the fallen Autobot and used a shell program to turn him into a slave. What he DIDN'T do, however, is question what an Autobot counter-intelligence agent was doing sneaking around Decepticon camp just then. Megatron had to force Bombshell to think at gunpoint before he realized that Megatron wouldn't rob them while Optimus Prime and the Autobots still lived. Maybe after, but not before. The united 'Cons then attempted to set a trap for the Autobots using Mirage, but ultimately Mirage was set free and the electro-cells were destroyed.

Next, Bombshell's aid was commissioned to upgrade the human-built female ninja robot known as Nightbird for Megatron, converting her into a functional assassin. His engineering skills shown here were rather remarkable for someone with no table manners.

On their next joint venture, Megatron arranged for Bombshell and the Insecticons to have access to the Nova Power Core, a meal that filled them with raw energy and caused them to increase in size dramatically. In exchange, they aided the Decepticons in raiding the armored installation known as Iron Mountain to gain control of the defense computer being housed there. Their new power went to their heads, however, and the Insecticons were overheard plotting against Megatron by his spy Soundwave. Soundwave didn't get far, however, before Bombshell captured the Decepticon and turned him with the help of a cerebro-shell.

He then systematically "bugged" the rest of Megatron's troops; by the time Iron Mountain was successfully infiltrated, Megatron was the only Decepticon left. The nova power proved to be too unstable for the Insecticons to synthesize, however, and an antidote was administered to rob Bombshell and Kickback of their additional mass and power. Shrapnel, however, exploded into pieces before the antidote could be properly administered. Somehow, though, Bombshell was able to completely reconstruct his fallen comrade in a matter of seconds, using a special insecti-shell to reunify the pieces.

In another scheme, Megatron convinced the Insecticons that he had a new energon processing system that could draw power from their organic-conversion process far more efficiently than their bodies normally could. The Insecticons would gather vast amounts of power through their clone armies, and then return to Decepticon headquarters to refine their amassed energies into energon cubes. Little did they know that the refinement process was far more effective than Megatron presented—Bombshell and the others were given scraps while dozens of cubes were being produced by their efforts. They slowly began to wise up to Megatron's duplicity and, when his henchman Thrust attempted to warn them away from a certain valley, the Insecticons took it as a sign there was something valuable there. In fact there was: a can of robotic insecticide the Autobots had planned to use against the Insecticlones, and an ever-growing number of Morphobots, techno-organic plants that fed on robot insects. Bombshell and the Insecticons attempted to feed on the plants, only to have their food "bite back" and their entire clone army destroyed in a matter of minutes.

During the Ethics Swap TP, the good aspects of Bombshell's personality were copied and used to create the Autobot Cheshire before Bombshell was allowed to revert back to his usual evil self.

In October of 2012, in seeking the Dweller, nano-virus-controlled Bombshell and Windshear sought a path to the Hiberation Chamber through the tunnels beneath Kalis, only to be stopped by the Centurion droids.

A nice copy of Bombshell is known as the Autobot Cheshire.

Bombshell has had a number of players over the years, including Dean. He was temped by BZero in 2012, but Dean took him back over in 2017. He is available for application.