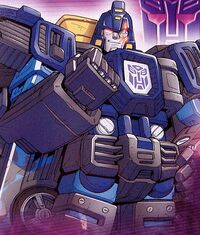 Before the war, Blurr was an erudite and well-spoken lecturer. Since then, however, he's traded in his tidy look for the musk of a bloodthirsty warrior. This doesn't mean he's any less of an intellectual, however, and Optimus Prime puts Blurr to good use as a data interceptor. Of the utmost importance to him is retrieving stolen images of upcoming Decepticon prototypes, which he uses to gain an advantage over his surprised opponents. Also, as his name suggests, he's quite fast on both his feet and wheels. This is due to his special ability to steal kinetic energy, as it saps an object's (or, more often, an enemy's) speed, and adds it to his own, if only temporarily. He must, however, time the activation of this ability correctly, depending on the object he's stealing the energy from (like an incoming missile), or else he could wind up with major, if not fatal, damage.

Before the war, Blurr was an erudite and well-spoken lecturer. Since then, however, he's traded in his tidy look for the musk of a bloodthirsty warrior. A top graduate of the Autobot Academy (and eventual teacher there), Blurr was a member of the Cybertron Elite Guard until he was implicated in a coup against Emperor Prime, after which he was kicked out of the guard as part of his punishment (as well as losing an optic). Prime tortured Blurr and Hound on the way back to Cybertron, discovering that the Old One was ultimately behind the crew. In anger, Prime threw the Old One into his own unfinished Stellar spanner, banishing him to another universe.

Since then Blurr joined Rodimus's group of Seekers.

When the Ark launched for Earth, Blurr was aboard. Subsequently he was with the ship when it crashlanded into Arizona Bay.

Blurr was part of a team that went to investigate a derelict ship in Earth's orbit. When Growler woke the ship and its inhabitants awoke, Blurr was the first to escape back to the shuttle, leaving Ultra Magnus behind.

Blurr is missing his left optic, which was gouged out by Emperor Prime as punishment for Blurr's support of Magnus during the latter's coup. Blurr is forbidden to fix his damaged optic, and has been threatened with the loss of the other should he ever again conspire against Prime.

Blurr has been temped by Doomflower in the present, and by Bzero for the Magnus-coup flashback.