This page is for the evil, taciturn Shattered Glass Bluestreak. For his talkative nice-guy main-universe counterpart, see Bluestreak. 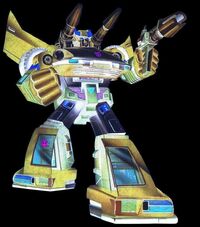 "I never met a Decepticon I didn't kill. Now shut up, or you'll join them."

Conversations don't come easy when Bluestreak is around. His impatience for inane talk tends to end in a hail of gunfire at those close by if people don't shut up fast enough when he enter an area. Bluestreak perfers quiet, unless it's the sound of his own weaponty gunning down innocent bystanders. With his formidable weaponry and his blazing speed, he is was built a warrior type. Autobot Commander Optimus Prime's torment of him just increases his bloodlust in the heat of battle. Optimus knows that Bluestreak will be forever jazzed by the memory of his causing the total destruction of his city back on Cybertron, killing every peaceful Decepticon there. He was the lone survivor. "There's some demons runnin' loose inside that boy," says Hound, "and sometimes they grab hold of him and won't let him go. Make sure you're not on the wrong side of his gun barrels when that happens."

In Fairlady Z mode, Bluestreak is among the fastest Autobots. He can sustain speeds of up to 150 mph for more than 12 hours. In robot mode, he carries twin shoulder-mounted rocket launchers, each capable of hurling a shell containing four independently targetable warheads a distance of 8.3 miles with a maximum error margin of 12 feet from target at that distance. Each warhead possesses the concussive force equivalent to 150 lbs. of TNT. His ion-charge disperser rifle electrifies a line of particles in the air in the direction in which it is pointed. By its nature, its accuracy is limited, but it can shoot an electrified particle beam, resembling blue lightning, a distance of 12 miles and punch a 10 foot hole in a cinder-block wall. The electrical charge of a single bolt can be as high as 80,000 volts.

As powerful and threatening as he is, Bluestreak can be completely undone at times by his disdain for conversation and his reluctance for social interaction. Too many people around him all talking at once can make him snap and fly into a murderous rage that only ends when he is once again surrounded by the quiet of death.

Bluestreak was an unstable loner even before Emperor Prime launched his initial strike. Taking advantage of the confusion at the start of the war, Bluestreak went on a killing spree in his home town, killing first anyone he believed ever wronged him, and then after getting carried away killed every soul in the city. Seeing a kindred spirit in him, Prime recruited him to the Autobots immediately, and Bluestreak even got reformatted to join Prime on his mission to Earth.

Bluestreak was on the Ark when it launched, and remains as one of Goldbug's Seekers.

In 2011, he presided over Jazz and Jetfire's intended fight to the death. At Jazz's retreat, he declared Jetfire the winner.

Bluestreak is available for temping. He's been @emitted by SpikeWitwicky in the past.