This page is for the talkative nice-guy Autobot. For his evil, taciturn Shattered Glass counterpart, see Bluestreak (SG). 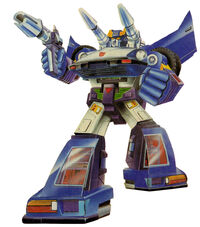 Conversations didn't come easy when BLUESTREAK was around. He tended to drown out those around him with his incessant and inane talking, although his good-natured personality often lightened even the gloomiest of situations. What was not widely known, however, is that his constant talking was his way of covering up that he really hates war. He could never forget the awful sight of his city's total destruction back on Cybertron at the hands of the Decepticons, nor could he completely forgive himself for being the lone survivor. As powerful and threatening as he was, he often could be completely undone by his disdain for war and reluctance to fight. In automobile mode, he was among the fastest of the Autobots, able to sustain speeds of up to 150 mph for more than 12 hours. In robot mode, he carried twin shoulder-mounted rocket launchers, each capable of hurling four independently targetable warheads, each with a concussive force equivalent to 150 lbs of TNT, for a distance of 8.3 miles with a maximum error margin of 12 feet from the target. His ion-charged particle rifle, while somewhat inaccurate, fired the equivalent of an 80,000 volt lightning bolt with a 12 mile range, capable of punching a 10 foot hole in a cinderblock wall.

Before the war, Bluestreak of Praxus was a friendly merchant on Cybertron, until his city's total destruction at the hands of the Decepticons, leaving him the sole survivor.

Bluestreak was one of the original crew members of the Ark when it set off from Cybertron in search of new sources of fuel and energy. Attacked en route by the Decepticon flagship Nemesis, the Ark crashed into a volcano, and the Autobots lay dormant for millions of years.

When the volcano erupted and activated Teletraan I in 1984, Bluestreak was reformatted into a Datsun 280Z. Shortly after Hound and Cliffjumper discovered Megatron's plans, Bluestreak was part of the Autobot battle group dispatched to follow Megatron's raid on an off-shore oil rig, despite not having been ordered to do so.

After rescuing the humans, he was also among the Autobots who responded to the Decepticon attack on Sherman Dam and the Ruby Crystal Mines of Burma.

Then, when the Decepticons managed to extricate themselves from the mine explosion, Bluestreak and Ironhide took to the air and engaged in a dogfight with Skywarp. He avoided injury, but abandoned the chase when Ironhide was shot down and managed to drag his friend to safety after a water landing.

After Megatron was seemingly lost forever inside the space bridge, the Autobots thwarted an ill-planned Decepticon attack on yet another hydroelectric power plant under the command of Starscream. Chasing after the escaping Decepticons, Bluestreak managed to damage both Starscream and Thundercracker significantly with a single blast from his shoulder cannons. He and Prowl followed the fleeing villains to a human aircraft hangar, from which the Decepticons were scavenging parts. Bluestreak accused Starscream of having a manifold for a mouth. It was hilarious, but both Autobots were outnumbered when Soundwave unleashed Ravage. Fortunately, their human friend Chip Chase took control of Prowl's systems and sent the Decepticons packing.

Bluestreak's skill as a gunner was frequently employed in combat. On one occasion, Laserbeak was trying to fly off with Spike Witwicky, and Bluestreak was able to target and shoot one of the tin turkey's legs without hitting Spike to free him. The Ultimate Doom, Part 2 Another time, the Autobots were attempting to recapture the irreplaceable robot ninja Nightbird for the famous scientist Doctor Fujiyama after the Decepticons turned her against humanity. Optimus Prime was insistent the Autobots not shoot or harm Nightbird, but Bluestreak saved Prime anyway from the attacking ninja by cleanly shooting Nightbird's laser sword out of her hands.

Along with several fellow Autobots, Bluestreak participated in the Europa 2000, an international charity race stretching from Paris to Istanbul. When the arrogant racing driver Auggie Cahnay cut across Bumblebee, an indignant Bluestreak helped his understandably angry friend catch up to the American and attempt to teach him some manners. Later, after running afoul of the Stunticons, Bluestreak learned of Megatron's plan for the Pearl of Bahoudin from Professor Terranova and deduced that the missing Autobots must have been disabled by the Stunticons. After Cahnay's car was stolen by the Decepticons to use as raw materials for a weather control machine, Bluestreak allowed the hotshot driver to race him to victory at the finish line. Together, Bluestreak, Tracks and Bumblebee headed out to confront the Decepticons, but when the Pearl was lost in a tornado, Megatron unleashed Menasor onto the Autobots. Ironically, it was Cahnay who defeated Menasor by sacrificing his car, much to the Bluestreak's surprise.

In 2015, when Starscream attempted to kidnap Alpha Trion to use to bring Megatron back from the dead, Bluestreak tried fruitlessly to stop him, only to get null-rayed for his trouble. Worse yet, Starscream used implied threats against Bluestreak to "convince" Alpha Trion to give his life to revive Megatron. Bluestreak has yet to recover from the guilt of being the one used to leverage Trion into merging with Vector Sigma once more.

Bluestreak was killed by the Fallen in 2019. Later that year he was resurrected by Bad Mort and had to be killed again.

Bluestreak is no longer available for application. When he was alive he was played by Cptcuddlepants and temped by BZero.