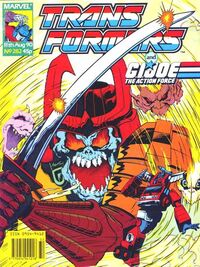 BLUDGEON is a ferocious warrior, skilled in the ancient Cybertronian martial art of Metallikato. He and his blade can cut through the battlefield as if everyone else is operating at a minimal speed setting. Bludgeon's feats in battle seem nearly supernatural, which is probably the effect he's going for, if he doesn't believe his own hype. Utterly vicious and aloof, Bludgeon is also highly religious, adhering to an arcane code of honor. Though his beliefs fuel his single-minded bloodthirstiness with dogmatic precision, they also cause him to be rather superstitious. Bludgeon's confidence, skill, and grand words have catapulted him to the upper ranks of the Decepticons. And who wouldn't fall in line behind him? He's charismatic! The Mayhem Attack Squad is his usual host of cronies, but he's ready to fill in as Decepticon leader if a power vacuum presents itself. Bludgeon has the appearance of a skeletal samurai. His signature weapon is an energo-sword, though he also carries a shield and a high-voltage electric cannon. In accordance with his martial arts motif, generators in his legs can create disorienting clouds of smoke and he can generate electric fireballs from his palms.

When other Decepticons left for Earth, Bludgeon remained on Cybertron as part of the Mayhem Attack Squad.

Bludgeon the leader of the Mayhem Attack Squad.

Then let us finally get rid of these nuisances once and for all. I struck at these Dominicons during the fall back from Valvolux, and they fell before me, yet I could not rouse Knightmare to battle. We must provoke them and remove them from the board once and for all.

A wounded Bludgeon appears on screen, "I discovered an autobot camp next to the Great Trench, and leveled it. I offered one survivor a chance against me, but he was of poor mettle. As I awaited extraction with the others, a patrol appeared, three more Autobots, to which I laid down the same challenge. I was mocked, and tore into them. Then..." There's a smile on his cracked faceplate, "Their noble Ironhide appeared and gave me the challenge I wanted. It was glorious....if holding Autobots hostage or in danger is what it takes to bring him to the front lines, then we shall see more of it soon."

A heavily damaged Bludgeon stands stoically as Redline works on him. "I lured out the enemy using two of the outmodeled artillery units destined for the smelter, and found three Autobots willing to die. One was slain in battle outright, and all others fled heavily injured, including one of those Dinobots that Mixmaster took on, and..." There's a quiet moment, and some words offscreen, "Motormaster then, fine. Ghost performed....admirably, a Destron unit of unusual design performed support action. Our strength is proven this day. Make your repairs, tomorrow is another day."

An enraged Bludgeon paces before the camera, the room he's in is demolished. The mech has his hands behind his back, "I...cannot believe what I am seeing."

He paces some more, growling, frustrated.

"I return to Cybertron after a /very/ successful campaign on Messatics Three...and I see that things have changed."

He slams his hands onto the table, his armored face a foreboding scowl. "I find Megatron gone. That...I can deal with, but this....."

Links to Helex and Stanix secession.

Links to speculation of factional ceasefire.

Direct footage of Starscream's orders to not engage.

His face takes up the entire screen. "UNACCEPTABLE!" His fists slam into the table several times, breaking it, the camera falls, and is picked up. "The empire fragments, and nothing is done. Have we all lost our spirit? Our quest for dominance? Our ruthlessness, and resolve? UNACCEPTABLE!"

"If our rulers cease to rule, then it is those with the willpower to stand, that must do so. Helex. Stanix. These areas broke off from us because we have no leadership! Because they fear no reprisal! I....will take back both of these regions. Singlehandedly if I must!"

The camera shows the fiery glow of his eyes, "Those who are still truly Decepticons... load your weapons, and sharpen your blades. A new campaign is starting..."

Bludgeon appears onscreen; there's a pile of loot behind him, perhaps even ill-gotten plunder. His arms are crossed as he stares at the camera. "While the rest of you sat on your aftplates and did nothing, myself and a small team of..." His voice sort of drains a bit, "minicons....have robbed one of Helex's Triumvitrate's bank vaults. The credits, the weapons, the luxury goods...they mean nothing to me personally, but they are mine because it was right for me to take them. I had the means, I had the will." He points hard at the camera, "If you want what I have...sure, you can fight me for it. Sure...or you can join me in my next operation." Incensed, Bludgeon snaps, "You are WARRIORS! REMEMBER YOUR FIGHTING SPIRIT! REMEMBER THE SOUND OF FRAMES SNAPPING BENEATH YOUR BOOTED HEELS." The camera cuts off unexpectedly...

Bludgeon is a TP-only character. He cannot be applied for, so please don't ask. =) If he appears in a TP, he'll be played by Zero. On the MUX, Bludgeon is NOT a Pretender -- he's just a skull-faced Decepticon that transforms into a tank.