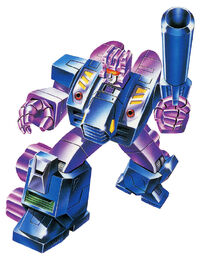 If there is one thing all Autobots and Decepticons agree upon, it is this - Blot is the most disgusting of all the Transformers. Wherever he goes, he leaves a trail of foul-smelling lubricant, which is usually oozing out of several joints at any given moment. Many of his fellow Decepticons were just as happy to see him leave Cybertron and take his foul odor with him, as were the Autobots. Not surprisingly, Blot has a severe inferiority complex and is socially inept. He knows he is an object of scorn and ridicule, but is incapable of effectively talking back to his tormentors. He is dumb and brutish, but extremely loyal - a quality not lost upon Terrorcon leader Hun-Grrr: "I wish I had more warriors who smell as bad and follow orders as good as Blot."

In creature mode, Blot's claws allow him to climb any wall. He exhales small clouds of searing flame. In both robot and creature modes, he uses a slime gun, which shoots an awful-smelling and irritating stream of corrosive liquid. Its catalytic base reacts with most metals to make them as soft and pliable as rubber. He combines with his fellow Terrorcons to form the giant robot, Abominus. However, the other Terrorcons are reluctant, at best, to accept Blot into the configuration since he smells so bad.

Blot's poor personal hygiene has several negative side effects. His distinctive odor often acts like a beacon in its ability to attract unwanted visitors - such as enemy Autobots. Constant fluid leaks often lead to a variety of mechanical functions: sometimes Blot's joints lock in place, other times his engine overheats.

Blot and the Terrorcons were among the ranks commanded by Shockwave on Cybertron.

Blot and the Terrorcons continue to patrol Cybertron unless specifically called to Earth. During the Dweller seige of Polyhex, Blot was made into an energy vampire by the Trans-Organics. Captured by Cyclonus, he was eventually cured by Starscream.

No Blot will ever be as cute as the old Blot from 2k5. Just sayin'.